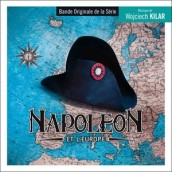 Just before he’d briefly invade Hollywood with his spectacularly ominous score for 1992’s DRACULA, esteemed Polish composer Wojciech Kilar would wave the colors for France’s self-appointed Emperor for the Gallic television series NAPOLEON AND EUROPE. Those American fans used to the elegant, brooding quality of Kilar’s work on DEATH AND THE MAIDEN and WE OWN THE NIGHT might be pleasantly surprised by the sometimes joyful quality of his main theme as it revels in triumphant orchestral splendor, sprightly marches and even a bit of Baroque harpsichord comedy, all setting the stage for a little man’s sense of greatness, and the world-conquering coronation that thankfully never arrived.

Few musicians have blurred the line between serious-minded classical composition and film soundtracks like Kilar, and those impossibly rich harmonic trademarks are also well on hand here, especially in a delicate, romantic theme that would soon develop into the attraction between Mina Harker and the Prince of Darkness. Both uplifting and elegiac as the drum rolls of defeat become apparent, NAPOLEON AND EUROPE  is a minor masterwork in Kilar’s cannon. However, it’s hard to believe any score was arrived at upon reading the liner notes by director Pierre Lary, who describes a botched meeting at Kilar’s industrial war zone residence in Poland as even more terrifying than a carriage ride to Castle Dracula.

Clink on the link to buy the NAPOLEON AND EUROPE soundtrack