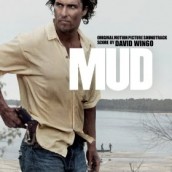 The poetic byways of American Gothic have proven to be musical streets of gold for David Wingo, particularly when casting an ethereal, acoustical spell from the urban youth of “George Washington” to the complicated small town relationships of ALL THE REAL GIRLS and SNOW ANGELS to the travelling musical salesmen employed by THE GREAT WORLD OF SOUND. One especially promising filmmaker to explore such avenues is Jeff Nichols, whose TWILIGHT ZONE-ish fable TAKE SHELTER allowed Wingo to compose a beautifully strange score for one man’s seeming mental breakdown amidst his farming community. Now Nichols takes another affectively unique rural turn to the boy’s life of the south, where two youths encounter the violence and despair of the adult world in the personage of MUD. Wingo once again creates a sonically unique world that captures possibility and despair, as heard with a striking combination of ethereal strings and acoustics- a rural sound that takes on a much bigger feel.

We’ve come a long way since adolescent awakening was played with the tender poignance of Elmer Bernstein’s TO KILL A MOCKINGBIRD. But in their own impressive ways, Nichol’s poetically visceral filmmaking, and Wingo’s alternative score capture that same classic feeling. With water being a major metaphor in MUD, Wingo creates long, beautifully floating themes that meld strings and strumming guitar, at once grounding the score in the hard-living river way of life while reflecting a bigger, danger-fraught existence outside of it. Blues cast an atmospheric spell with ethereal electronics as their backing, Cajun violins and percussion sounds rustically weathered, while menacing percussion hits the violence that’s waiting to shatter its kids’ innocence. Wingo’s melodically transfixing approach grows with suspense as the inevitable emotional and physical showdown drifts closer, the score becoming all the more haunting. To think of MUD as being scored by Ry Cooder on an acid trip might be the highest compliment I could play to Wingo’s dream-like sound, as conjured under a southern sky.

The more straight-up, down home numbers are provided by Dirty Three, a group whose powerful, driving guitars bring the raw energy of Explosions in the Sky to mind, while Lucero provides the longing country blues of “Take You Away” and a honkytonk groove for “Everything You Need,” numbers that solidly ground Wingo’s dream-like musings.

CD review: CARS 2 original soundtrack
THE X FACTOR Season 1 Recap: Nothing to Crow about as Rachel Crow gets...
First Look: New photo of Matt Smith from the DOCTOR WHO Christmas spec...
Exclusive Interview: SHARKNADO star Jaason Simmons is not in Kansas an...