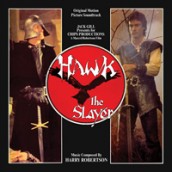 There’s perhaps no finer smell of cult cheese then an 80s so-bad-it’s good sword and sorcery movie, a genre that Buysoundtrax seems to love above all other labels as they follow up THE SWORD AND THE SORCERER with this hilariously entertaining gem that started off that decade. But where Albert Pyun’s movie drew from the Hammer ranks by getting VAMPIRE CIRCUS‘ David Whitaker to compose a classically symphonic score, HAWK THE SLAYER director Terry Marcel had LUST FOR A VAMPIRE‘s Harry Robertson (who also produced the picture itself) melds disco with an orchestra for a score of immense guilty pleasures.

Though made in England, you’d swear you were listening to some Italian knockoff given how dexterously Robertson wields a SATURDAY NIGHT FEVER funk beat with a cool heroic theme, all topped off with a repeating “bird” motiff for electronic and flute- a repeating cry that instead comes across as the wolf whistle for some Spaghetti western. Though it’s all incredibly silly, there’s also real heart to HAWK THE SLAYER‘s score, earnestness that’s backed up with true melodic valor, period flutes, cimbaloms and strings as channeled through all of the era’s gloriously goofy synth-rock excesses. HAWK THE SLAYER is crystal ball dance globe as heroic fantasyland, and a score that’s infinitely more listenable and entertaining than many of today’s far more straight-faced scores in the genre.

Click on Link: To Purchase the HAWK THE SLAYER soundtrack