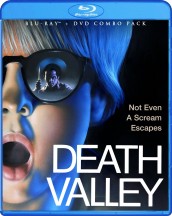 Scream! Factory is digging deep for great horror movie titles that haven’t been given a proper DVD or Blu-ray release and that continues with this month’s entry DEATH VALLEY from 1982.

The notable thing about this movie was that it features Peter Billingsley a year before he made a big splash as Ralphie in the classic A CHRISTMAS STORY.

Here, Ralphie, errr, Billy, doesn’t even have to worry about a BB gun, he gets an actual gun that he has to use at some point in the movie. So, in a weird way, the film actually has many other unintentional layers that you wouldn’t even expect.

The story is very Hitchcockian as it follows kid Billy who is dealing with the divorce of his parents the best way he can. When his mom Sally (Catherine Hicks) wants to visit her new boyfriend Mike (Paul Le Mat) in Death Valley, Calif., Billy is dragged along.

There’s many uncomfortable moments between Billy and Mike (who tries hard to be a father figure, but fails miserably). Things take a nasty turn when Billy walks into a trailer, and doesn’t realize a murder has just taken place and he steals a key piece of evidence that can finger local serial killer Hal (Stephen McHattie).

Not much happens in DEATH VALLEY. It’s slow-paced, and even though there are some really great suspense beats (and some unneeded obligatory 1980s gore and nudity), the film really doesn’t hold up very well.

Gluing the movie together is Billingsley appealing performance – a little more introverted than Ralphie, but you can see, based on this movie, why the filmmakers would cast him in A CHRISTMAS STORY.

The film falls apart toward the end, as it tries to build to a big climax and tosses in what appears to be a twist, but the twist is actually spoiled in the first fifteen minutes, so it’s not really a twist at all.

Audio Commentary by director Dick Richards is a bit dry, and the rest of the special features are bare bones. There’s a TV spot and a theatrical trailer, and surprisingly, the theatrical trailer makes DEATH VALLEY look like a kick-ass amazing movie. There’s also a DVD and Blu-ray disc included in the same package, so it’s a pretty good bargain too.

If there ever was a movie that needed the help, it would be this film – but it is amazing to see how savvy the marketing was. The movie has very little action and suspense, yet they used what bare minimum the film has and made you really want to see the film (unfortunately it didn’t help get people into the movie theaters when the film was first released).

It’s great when films like DEATH VALLEY get a second life on DVD and Blu-ray. It may not be perfect, but I’ll take DEATH VALLEY over any of the low-budget horror crap that’s released nowadays.