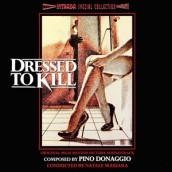 As PASSION rears its head, the De Palma-Donaggio collaboration slashes completely at its most beautifully thrilling score 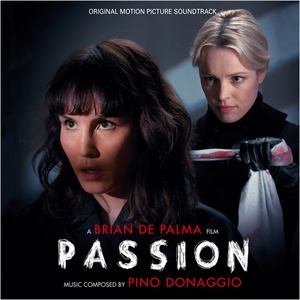 Filmmaker Brian De Palma couldn’t have asked for a better composer to assist in his stylish Alfred Hitchcock dress-ups for SISTERS  and OBSESSION than the composer the Master of Suspense did wrong with TORN CURTAIN. After Bernard Herrmann’s passing, a talented Italian named Pino Donaggio, who’d thrilled with the right musical stuff whilst pursuing DON’T LOOK NOW‘s killer dwarf about Venice, stepped into the maestro’s music shoes to perfectly replicate Herrmann’s identity in a way that would make Kim Novak jealous.

Of the De Palma-Donaggio collaborations that included CARRIE, BODY DOUBLE, BLOW OUT and RAISING CAIN, none reached the stimulating copycat perfection of DRESSED TO KILL, an exhilarating retread of PSYCHO that took Hitchcock’s taste for deviancy to bloody, and sexual heights undreamed of by that auteur. Now Intrada has raided Donaggio’s closet to discover all his masterpiece’s black-suited wardrobe for an album that finally reveals all when it comes to showing just how visual a score can be as a storytelling device, especially when put into the hands of an homage-obsessed filmmaker who wasn’t afraid to let a soundtrack have its way for now-unthinkable stretches of screen time.

Much like the truly hot shower that opens DRESSED TO KILL, Donaggio’s score is all about steamy passion, from its luxuriant lullabye-like theme to cooing female voices. But what’s so affecting about Donaggio’s score is how well it penetrates its silken flesh to get inside of its temporarily leading lady’s mind. “The Museum” remains one of the great bravura score-only pieces in cinema, turning a cat-and-wolf pursuit at MOMA into an emotional progression from hunger to despair and anguished suspense, finally paying off in a orgiastic climax. But Donaggio’s score is also the ultimate moral arbiter, crying brass, pounding drums and very familiar violin slashes gleefully unleashing payback from venereal disease to a straight razor.

DRESSED TO KILL  remains incredibly melodic, its bells, vibes and delicate pianos all contributing to the lushest score ever composed for then graphically shocking material that made this 1980 picture the gateway to a new era of anything-goes suspense. Yet De Palma’s excellent taste, especially when it came to music, is all about elegance over crudity, allowing for a score that’s just as gorgeous whether its stroking skin or rending it. Having the complete, resplendent-sounding score only makes the experience all the more luxuriously sinister, with particularly notable additions being the tick-tock tension of a camera spying on a suspect psychologist, and the beyond erotic vibes of its lingerie-clad hooker’s storytelling, the music’s sensuality enough to bring a raise out of any man, or unleash the killer woman within.

Elements like lethal electric percussion, and a sultry give PASSION a throwback feel that brings to mind BODY DOUBLE, while the seven-minute “Journey Through A Nightmare” is more than reminiscent of “Museum’s” tense, trembling motions, if far more sinisterly emphatic. Far more Donaggio than Herrmann, “Passion” is about murderous anticipation as opposed to turning on the thematic heat. Sure might be DRESSED TO KILL lite, but the teaming of De Palma and Donaggio is more than reason to celebrate.

Clink on the link to buy DRESSED TO KILL soundtrack

Clink on the link to buy PASSION soundtrack