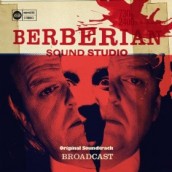 Seldom has a movie gotten everything technically right, yet ended up so completely wrong as the Giallo homage BERBERIAN SOUND STUDIO, which sets up an Italian mixing facility as the perfect sound stage for murder, yet forgets to have anything happpen during its beautifully done, deadly dull progression of an engineer’s mental unravelling. But all of that being said, Broadcast’s score manages to be BERBERIAN‘s single most successful salute to this suspenseful Neopolitain style, the perfect accompaniment to create a way better movie in one’s own mind.

While Broadcast’s pitch-perfect work could easily play over any classic Dario Argento film like DEEP RED and INFERNO, it’s one thing to do a spot-on replication, and another entirely to create an original homage. They’ve accomplished it here in high style with the rock guitar, flutes, harpsichords, electric organs, progressive keyboards and spellcasting female voices that made up the inimitable sound of such rock-inspired composers as Goblin and Fabio Frizzi. Composed of short, eerily intense cues, Broadcast casts a sinisterly beautiful spider’s web of haunting melodies, hypnotically conjuring the echoing, Baroque-lullaby atmosphere that made this distinctive movie genre as elegant as it was brutal. BERBERIAN is at once a thrillingly fastidious throwback, and a vital return to what’s arguably horror scoring’s most innovative period, albeit a dubbed one. This sum total salute doesn’t disappoint on the end either, containing enough gargling, gibbering and incanting vocal effects to freak the neighbors out as the music enchants them into dark corridors where sharp instruments lurk.

Clink on the link to Purchase Berberian Sound Studio soundtrack