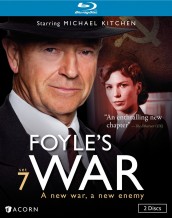 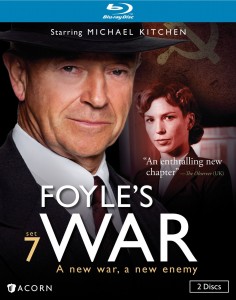 It’s relatively rare for a series to actually change genres, but with Season 7 (or Series 7, as the British call it), FOYLE’S WAR goes from a WWII police drama to a post-WWII espionage thriller without losing any of its tone, clarity, twists or, crucially, its hero Christopher Foyle, impeccably played by Michael Kitchen.

There may be some confusion as to the contents of this box set, as it is advertised as FOYLE’S WAR 7, but IMDB and epguides.com list it as Season 8. For the purposes of this review, we’ll go with the box set definition as Season 7.

At the end of the previous season/series of FOYLE’S WAR, WWII had ended and Foyle decided to leave forAmerica (which led to some speculation that a seventh season might take place in the post-warU.S.). At the start of Season 7, Foyle is just off the boat, returning to England after having ruffled some political feathers in the U.S. Foyle isn’t particularly keen when he’s recruited by the British government’s Special Branch MI-5 (theU.K. equivalent of the FBI), but he’s left little choice. At least, through a logical set of circumstances, he’s allowed to re-employ his old driver Sam (Honeysuckle Weeks), who’s now married to aspiring politician Adam Wainwright (Daniel Weyman).

In the first episode, “The Eternity Ring,” Foyle is asked by his handlers to ascertain whether or not a spy organization known as the Eternity Ring actually exists. In “The Cage,” Foyle finds evidence that illegal military activity is occurring on British soil. In “Sunflower,” Foyle is reluctantly ordered to protect a Nazi officer now serving as an MI-5 information asset, while Sam tries to help Adam straighten out an apparent abridgement of a citizen’s rights.

The period detail is perfect, and the production design has a muted palette that may trick our minds into thinking we’re looking at the era’s black-and-white cinematography, even though FOYLE’S WAR is technically in color. The plots are all exactly the sort of the thing we expect from PBS MASTERPIECE MYSTERY (the U.S. broadcast outlet for the series) – erudite without talking down to us, complex without being oblique, specific enough to its setting and time that it couldn’t be transplanted, yet without seeming to be an exploration of some hitherto undiscovered culture.

Most of all, though, FOYLE’S WAR has wonderful characters. Foyle is a man of principle, common sense and humanity, all of which come through in Kitchen’s performance. Weeks is able to take Sam’s spunkiness and make it fit the world around her, so that she is at once someone we can identify with and someone who suits her circumstances.

The box set comes with some making-of featurettes and illuminating introductions to each of the episodes by series creator Horowitz. These segments are charming but should probably be viewed after the main features rather than before, as they add clarity but also more foreshadowing than some viewers will want.

As it has in its past seasons, FOYLE’S WAR 7 shines.