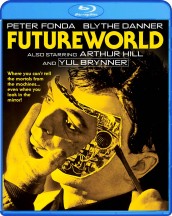 With 1973’s WESTWORLD, writer/director Michael Crichton created an innovative sci-fi film about robots at an adult amusement park that malfunction. Many films have cribbed from this seminal sci-fi film, even though it has become a bit dated. Three years later, a sequel was hatched without Crichton with FUTUREWORLD, and surprisingly, it holds up quite well.

The new Blu-ray release brings to life the film in high-definition with a story that is more INVASION OF THE BODY SNATCHERS than WESTWORLD, and that’s part of its success. Instead of rehashing the first film’s major beats, the movie takes things in a slightly different direction under the scripting of Mayo Simon and George Schenck.

After the malfunction at Westworld, Delos, the corporation behind the amusement park, has reopened and even invited the press to check out what they’re up to including former lovers and now competing reporters Chuck Browning (Peter Fonda) and Tracy Ballard (Blythe Danner).

While there, Chuck and Tracy see how advanced things have become at Delos, particularly with the robotics that can mimic human life forms. In fact, the corporation has found a way to clone people (with their memories, desires, dreams completely intact) without them even knowing it.

As Chuck and Tracy go further down the rabbit hole, they discover they’re part of a far more sinister plot which includes them as well.

FUTUREWORLD has a whole bunch of 1970s kitsch mixed in with its clever sci-fi. It also deals with the paranoia of corporate culture, which has become even more prevalent today.

The acting is a bit over-the-top at times, but Fonda and Danner have a great rapport and keeps the film moving at a brisk pace.

There’s also a very sad failed attempt at bringing back Yul Brenner’s gunslinger character from the original film and it’s completely botched by placing him in the context of a really twisted semi-erotic fantasy sequence.

The direction by Richard T. Heffron is also quite good as FUTUREWORLD proves to be much better than remembered and with the pristine transfer, the look and feel of the movie is better than ever.

The special features are skimpy. You get the theatrical trailer, some radio spots and a still gallery, and that’s about it, but at least it’s something.

While there’s no special features, the High-Def transfer is the biggest bonus and the film is also priced right.