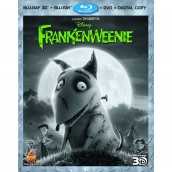 One of the most criminally overlooked animated features from last fall was Tim Burton’s FRANKENWEENIE, a black and white stop-motion animated feature based on his 1984 live action short. Now that it’s arrived as a four-disc special edition, hopefully people will finally discover what a great and original film this is.

The story follows young tyke Victor Frankenstein who is tied to the hip with his best friend and dog Sparky. He loves his dog and even makes home made movies for that his loyal dog stars in.

Then a horrible accident occurs – Sparky is killed by a car and Victor attempts to bring him back to life. It works, but other kids in the neighborhood find out about his secret and they start to bring their pets back to life too. The end result is a undead pet-palooza by the movie’s end as the action and humor are ratcheted up with some very funny classic movie homages.

While the original short only focused on paying homage to FRANKENSTEIN, the new film needed more material to stretch it to feature length, and the dead pets coming back to life turns out to be a surprisingly and original way to go since it allows for spoofs of other monster movies including those old GODZILLA movies.

The stop motion animation is phenomenal, and while it was a big risk to do the film in black and white, there’s really no other way to capture the flavor and style of the classic Universal horror films that Burton is paying homage to.

Like the original short too, this story is a bit dark for younger kids as well, but considering how THE NIGHTMARE BEFORE CHRISTMAS took years for it to be appreciated by younger audiences, a similar fate seems destined for this too.

The 4-disc special edition includes a Blu-ray, DVD, Digital Copy and a Special 3D Blu-ray which allows you to view the film as it was in theaters. While most 3D movies tend to be a bit thin on actual 3D, the stop motion world really comes to life in this format. There’s an immersive quality to it, but there’s also an old-school, “comin’ at ya” style to the 3D which is more than welcome as well.

The special features includes the original FRANKENWEENIE short and watching it again, side-by-side with the feature, it’s cool to see how much of the short is actually recreated in stop-motion. The short holds up well too, and really makes for a nice alterna-universe for the stop motion feature.

There’s a bonus FRANKENWEENIE short as well called “Sparky Vs. The Flying Saucers” that showcases one of Victor’s pre-undead Sparky movies as he battles flying saucers. It’s a fun two-minute bonus to add to an already great film.

A standard making of featurette is included, showing how the movie was made in the London studios, a look at a Frankenweenie touring exhibit featurette, and a music video of the Plain White T’s doing a cover of the classic Ramones song “Pet Sematary”.

While Tim Burton had a major misfire with the live action DARK SHADOWS last year, FRANKENWEENIE definitely redeemed him. It’s a dark, original and one of the best animated films of 2012. Sure, it would have been nice for it to be as embraced by audiences like HOTEL TRANSYLVANIA (which came out a week before FRANKENWEENIE did) but, as Burton’s films have proven, time will be the true judge of its longevity. And the odds are very good for this one indeed.