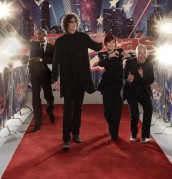 AGT goes to St. Louis in search of talent!

It’s no secret that Nick Cannon is part of the allure of AMERICA’S GOT TALENT. Sometimes, he’s the best part of the show. When Cannon jumps on stage to rescue a failing or three-time buzzed act he immediately makes the act worth watching. Case in point, during the “St. Louis Auditions” when a voice-over wannabe didn’t cut it with the judges, Cannon appointed him his deputy narrator and let him take on some of his hosting tasks. Not one to be threatened, Cannon graciously allowed his protegé (Ron Porter, Jr.) to hone in on his territory. Now that’s class.

Sadly, not all acts were worth rescuing. A puppeteer who seemed to be unaware of his lack of talent, a singer & drummer who could neither sing nor drum and a girl who crushed 7UP soda cans hit the stage with a big thud. One can’t help but wonder…who are these people and how come those that love them don’t tell them not to go on TV and humiliate themselves? A dancing chicken? C’mon, for real? There was even a lasso artist who couldn’t lasso begging Howard Stern to come on stage and give it a shot. The truth? Stern was just about as good (or bad) as the lasso artist.

Sweet and precocious Isaac Brown at just six years old had more insight into the world than most adults I know. He sang. He danced. He theorized. He chatted. He won a trip to Las Vegas! Escape artist Spencer Horseman had Cannon tie him up in a strait jacket before escaping just in the nick of time from harm’s way. Stern was intrigued and Howie Mandel was mesmerized which means..he’s going to Vegas.

Sharon Osbourne adored a tap dancing group with a five and a half-year mascot. Stern dug a fiddler saying he was the best he’s ever heard, while Mandel called him brilliant. Singer Jake Rogers also impressed the judges earning a trip to Sin City.

Unfortunately, Little Ozzy did not win favor. Although quite humorous, Stern and Mandel quickly buzzed him while Osbourne didn’t have the heart, but none pushed him through.

The Cutthroat Freak Show was more than most could handle watching, lifting things with your eye lids and stepping on broken glass…eh! Still, the boys wanted more. On to Vegas for the freak show!