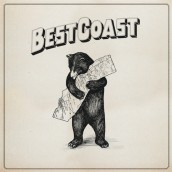 ©2012 Mexican Summer
The Best Coast - THE ONLY PLACE
Reviews

While I heard nothing but raves about the Southern California buzz band Best Coast when they release their 2010 debut CRAZY FOR YOU, I found the 1990s inspired alt-music thin and the echoy vocals hard to get my head around. The vibe was there, the songs weren’t.

With the Best Coast duo of Bethany Cosentino and Bobb Bruno back for their sophomore effort THE ONLY PLACE, I suspected it would be more of the same. Yet here’s an excellent follow-up record that lives up to the promise of CRAZY FOR YOU and then some.

Produced by Jon Brion who has worked with everyone from Aimee Mann, Fiona Apple and Katy Perry, he takes a stripped down approach with The Best Coast. The vocals are more prominent in the mix and the soundscape is super clean and polished – feeling alternative enough yet also capturing that ambient and airy feel of their debut.

The songs themselves have a 1950s-esque groove and template (think more of a rock version of Julee Cruise), while still feeling like the perfect CD to play in your car while driving down the California Coast.

The kick-off song is the infectious “The Only Place”,  an ode to the Golden State with such lyrics as “Why would you live anywhere else?/We’ve got the ocean, got the babes/Got the sun, we’ve got the waves/This is the only place for me.”

The band has expressed love for Fleetwood Mac which also had SoCal roots and at times, there are lo-fi homages on songs like “Better Girl” and “Don’t You Love Me Like You Used To” that echo Lindsey Buckingham’s experimental work on the TUSK album

Yet, for as much as The Best Coast wear their influences on their sleeve, Cosentino (who provides vocals and guitar) and Bruno (who covers drums, guitars and bass) have etched out their own thing. It’s catchy, breezy and an animal all its own.

It’s hard to get songs like “Why I Cry” and “How They Want Me To Be” out of your head, yet the songs work separate from the album and also as a whole.

Yes, there are probably one too many mid-tempo tracks (it would have been nice for a few more rockers), but the album is so great, why bring negatives into it.

Record stores have been handing out a free 45 single with the purchase of the album and the B-side features a cover version of the Fleetwood Mac track “Storms” (penned by Stevie Nicks). It’s so hard for artists to cover any song by Nicks, but Best Coast do a bang-up job bringing their own style to the mix. In fact, if you didn’t know any better, you’d think “Storms” was a Best Coast song.

Check them out now before the mainstream appropriates them and “The Only Place” is liberally used to sell cars and beer.

Purchase The Best Coast – THE ONLY PLACE