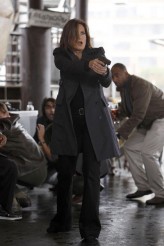 At this morning’s TCA press tour session for NBC, Entertainment Chairman Robert Greenblatt revealed that Mariska Hargitay will appear in all episodes of the show’s current thirteenth season and she will not be leaving the show next year.

He also introduced a pre-taped clip from Hargitay who revealed that she will have a love interest in the Spring with new A.D.A. Harry Connick Jr. (he has a four-episode arc).

In the clip, she’s asked if she will return for another year and she says, “I’ll be back – I’m having too much fun.”