Home » TCA News: ABC says DANCING WITH THE STARS will be on the air for years to come 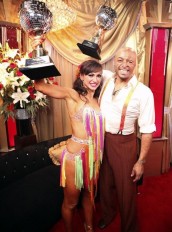 TCA News: ABC says DANCING WITH THE STARS will be on the air for years to come

While reality show hits seem to wane and wax over the years, ABC Entertainment Group President Paul Lee says he expects DANCING WITH THE STARS to remain on the schedule for years to come.

“Obviously each year the casting sometimes tells you where it’s going to come out. Although, I have to say we started with a weaker cast this year, and with J.R. [Martinez] winning it, it was a wonderful storyline,” says Lee. “Look how much THE BACHELOR has lasted and done so strongly for us. It’s romantic. It’s right in the heart of our brand, so I personally think DANCING WITH THE STARS has many, many more years to come. And actually when you go and look back at the early seasons, the level of celebrity wasn’t nearly the level that we’re starting to get now. I’m a huge fan of that show”

Casting is also key according to Lee who says the series refreshes itself every season.

“The really interesting thing now is that the dancers are almost more or as much stars as the celebrities and they have their own storylines, but truly it’s about casting,” says Lee. ” And sometimes it’s controversial candidates like Bristol [Palin].  Sometimes it’s a somebody who brings a fantastic nostalgic element to it. Sometimes it’s somebody like Kirstie [Alley] who people just loved. They loved it that she was losing weight.  They loved it that she was such an emotive character.  So really, frankly, as in many scripted television, it’s all about the casting and that’s how you keep it alive.”

Article Source: Assignment X
Article: ABC says DANCING WITH THE STARS will be on the net for years to come