TCA 2012: NBC discusses the state of their Thursday night comedies THE OFFICE, 30 ROCK, and PARKS AND RECREATION 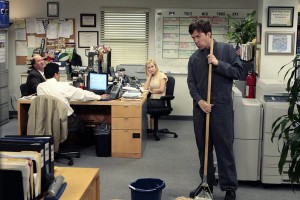 As NBC begins to transition from its aging comedy series to finding the next big breakout hits, change is inevitable.

And even though THE OFFICE, PARKS AND RECREATION, COMMUNITY (now on Fridays) and 30 ROCK are critics darlings, ratings have been on the decline and NBC Entertainment Chairman Robert Greenblatt says they are looking to find broader based shows to fill those holes if and when those series go off the air.

“The Thursday night shows are great shows,” says Greenblatt speaking at this week’s NBCUniversal Summer 2012 Press Tour. “They’re award-winning and incredibly sophisticated and clever, and we couldn’t be prouder of them. I think, given what’s happened at the network over the last four or five years in terms of just the general decline across the whole week and the loss of circulation – I think we just can’t get the biggest audience for these shows. They do tend to be a little bit more narrow and a little bit more sophisticated than I think you might want for a real broad audience.”

Greenblatt then adds that he’s banking on his new crop of sitcoms to come to the fore and create some new anchors for the comedy slate.

“I hope these new shows that we’ve got for the Fall and the Spring are clever and also smart and that you critics like them, but I hope they can also broaden the size of the audience,” says Greenblatt. “This is also going to require everything else at the network being lifted. So I don’t want to say anything negative about what Tina Fey does or PARKS AND RECREATION or THE OFFICE. Those are great shows. It’s probably a challenge for every network these days, especially in comedy, to broaden them. That’s what we’re trying to do.”

NBC Entertainment President Jennifer Salke adds that many of the showrunners on their current comedy series have also been thinking in terms of bringing in a broader audience as well.

“We’ve had incredible creative meetings on the new seasons and these creators are also trying to embrace the idea of staying true to what their shows are and keeping the loyal fans like you guys and who we are and the rest of the people who watch the shows really invested, but opening up things a little bit and trying to be a little more inclusive of maybe what would be a broader audience,” Salke says. “It’s not us saying ‘broaden your show out.’ We stay true to those shows. We support them creatively, but we are in this kind of awkward stage of trying to take what’s working at the network and expand it out and build on that. In doing so, some of our new comedies might seem more commercial to you. I think they fall in line with the shows that could be on Thursday night, but if you see them, they actually feel like they open up to a larger audience. And that’s what we’re hopeful for. It’s kind of an evolving comedy brand.”