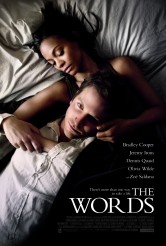 One of those movies about literary fame that falls into some of the subgenre’s pitfalls, but has definite worthwhile qualities

No one can fault THE WORDS for ambition, either as a film itself or in its eagerness to examine exactly what ambition means. It therefore gets points up front for being a film that wants to look at why people do what they do, even when their actions wind up putting them at odds with the results they ultimately yearn to achieve.

THE WORDS, written and directed by the team of Brian Klugman & Lee Sternthal, introduces us to a story within a story. Famous writer Clay Hammond (Dennis Quaid) is reading from his new book to an adoring crowd at a gala event. The novel concerns New Yorker Rory Jensen (Bradley Cooper, also one of the film’s executive producers), who we meet on the way to a similar gala with his loving wife Dora (Zoe Saldana). An old man (Jeremy Irons) watches them at a discreet distance. Rory is now a famous author (like Clay), but once upon a time, he was an aspiring writer who couldn’t get published and had to take a day job at a publishing company to make ends meet. However, when Rory and Dora take a vacation to Paris, Dora buys Rory a cool-looking old satchel. When they get back home to their loft, Rory finds an old manuscript inside the satchel, the story of a WWII G.I. (Ben Barnes) who falls in love with a Parisian woman (Nora Arnezeder) and returns after the war is over. Rory is so entranced with the manuscript that he feels the need to type it up, just to feel what it would be like to have words like this come from his hands.

This last, as most fans or even people just fond of quoting can tell you, really isn’t that unusual. Indeed, it’s common enough that we wonder that once it’s mentioned in the “text,” Rory never thinks to bring it up again when it’s very relevant. In any case, Dora finds the manuscript on Rory’s computer, tells Rory it’s the best thing he’s ever written and insists that he show it to his boss (Zeljko Ivanek) at the publishing company.

Since we’ve already seen Rory being celebrated for “his” work and the Old Man, no prizes for guessing where some of this is going, though other aspects are not what we might expect.

There are several problems here. One is that the premise of plagiarism has been used so frequently for comedy that it’s hard to see it in wholly dramatic terms; a little more levity might have paradoxically helped us take it all more seriously. To be fair, Cooper’s visible conflicting emotions in a highly effective performance make us feel for Rory more than we otherwise might.

Then there’s the matter of motivation. Yes, Rory wants to prove himself to his loving but skeptical dad (J.K. Simmons, who is terrific), and yes, the book opens the door for him, but his need to know for himself that he’s a good writer, as opposed to wanting the trappings of fame, is shown to run so deep that he seems an unlikely plagiarist in the first place. His reaction to the Old Man is on one level understandable, but on another seems to belie what got him there in the first place.

The Old Man’s own reaction seems to run counter to the themes raised in the initial premise. We can see the kind of character that the filmmakers – and Clay – are trying to create with him, but it’s countered by the character’s actions, so that lots of fascinating questions that the film seems poised to discuss get dropped in favor of a certain kind of tradition. (At this point, we wonder if Clay’s readers have the same issues that we do.)

There’s also the issue of Irons’ performance. There’s no question that Irons is a phenomenal actor, but here he’s being asked to play an ordinary man – a former American G.I. – who has settled for an ordinary life and is just now roused to action. Irons is a lot of things, but he’s not an ordinary elderly American and his anger as the Old Man has the sting of power and wit, not the plaintiveness of someone trying to battle his own sense of powerlessness. It could be argued that this is a valid choice, except for the evidence we’re given to the contrary, onscreen and in the narrative.

Finally, we see in flashbacks and read just enough of the work that Rory has plagiarized to have doubts about its capacity to get the effect that it seems to have on everyone who reads it. Then again, there are some bestsellers whose popularity seems inexplicable to many naysayers, so perhaps this last criticism is unwarranted.

Quaid is wonderfully charming and loose and self-deprecating; we enjoy spending time with his character, even when we know he’s being a bit of a jerk. Ivanek is excellent in a role that winds up having surprising depth in a relatively limited amount of screen time.

In production terms, the filmmakers have done a lovely job of making Quebec look like post-war Paris and contemporary New York and the overall gloss is impressive.

THE WORDS aspires to cover much more thematic and emotional ground than most films attempt to do. It is occasional successful, occasionally not, but it certainly gets us thinking, even when it’s being contrary. That’s ultimately a good thing.