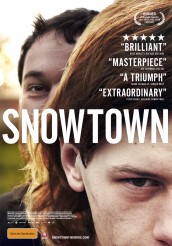 A dismayingly convincing look at a homicidal sociopath

The mention of an Adelaide community called Snowtown may not immediately spark a dark association in American minds, but to Australians, it’s like bringing up the Hillside Strangler. John Bunting,Australia’s most prolific serial killer, with eleven documented victims, committed his murders in the little working-class area while residing there himself. There were several unusual aspects of Bunting’s crimes – rather than being a loner, he had a cadre of accomplices. Furthermore, rather than killing strangers, Bunting and his group tended to single out people they knew personally.

Director Justin Kurzel and writer Shaun Grant, working from the books KILLING FOR PLEASURE by Debi Marshall and THE SNOWTOWN MURDERS by Andrew McGarry, give us a kind of ground’s eye view of Bunting. THE SNOWTOWN MURDERS is largely told from the perspective of Jamie Vlassakis (Lucas Pittaway), age sixteen when John (Daniel Henshall) comes into his life. Jamie’s mother Elizabeth Harvey (Louise Harris), divorced from Jamie’s father, thinks her new boyfriend fits in well with her and her three sons – until a gay friend of the family alerts Liz to the fact that the boyfriend is taking pornographic photos of all three boys. Liz is understandably furious, more so when the malefactor is set free.

When Liz hooks up with John, he urges Liz’s sons to deface the front of their molester’s home. This first incident, while ugly (including the painting of a homophobic epithet on the building), can be seen as the boys standing up for themselves after being criminally abused. But then John gets around to his real agenda. He is a hardcore homophobe, against anyone who is “deviant” and is quite vocal about his beliefs that they should be violently removed from society.

The little group that gathers in Liz’s kitchen cheers John on, but they don’t have a clue as to what he is doing. However, John decides to take Jamie under his wing and indoctrinates him by having Jamie shoot John’s friendly, obedient dog. This is actually off-camera (the filmmakers didn’t really shoot a dog), but it sets the tone for the graphic, merciless attacks on human beings that follow.

As a portrait of how a vicious sociopath can function and even flourish, THE SNOWTOWN MURDERS illuminates, using a steady low-key tone that mimics the environment that is both physically and spiritually rundown where the characters live. Henshall is excellent and the rest of the cast are wonderfully subtle and nuanced.

However, in going for a documentary feel, the filmmakers sometimes muddy what’s going on. We are occasionally pulled out of the narrative by trying to figure out whether and how certain characters are connected to one another. This also has the effect of muting the effect on the remaining characters, especially Jamie. It’s less than clear in the film that (as stated in the Wikipedia entry on the killings) that part of Bunting’s motive was financial – he redirected his victims’ state welfare checks to himself. We do see the elaborate methods Bunting used to make it seem as though some of these people had cut ties and left town, but this is one instance where a few lines of on the nose dialogue about exactly what’s going on might have been welcome.

Although Bunting and his collaborators were eventually arrested and locked up, there’s no audience catharsis within THE SNOWTOWN MURDERS; we get this information via an end title. If you’re looking for a standard procedural, this is not it. If, however, you want to know how violence, intimidation and prejudice can thrive unchecked for a very long time, THE SNOWTOWN MURDERS is here to show you in tragically credible terms.