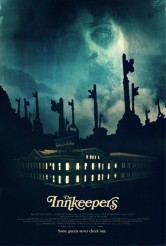 Efficiently scary but lighter on plot than it promises

Probably the most important aspect of THE INNKEEPERS is that it is effectively scary. Writer/director Ti West (HOUSE OF THE DEVIL) makes a virtue of the suspense that comes from a playful, naturalistic build-up – let us wait long enough and even the most mundane situation develops tension if we know something wicked this way comes.

On the flip side, THE INNKEEPERS promises more in the way of plot, mystery and mythos than it delivers. We are at the Yankee Pedlar Inn, which is on its last weekend of being open for business. With a name like that, one might suppose the establishment to be very old, but its central haunting dates back to the 1960s, when a bride-to-be hanged herself after being left at the altar. The inn’s proprietors at the time hid the body in the basement for three days for fear of scandal.

As the basis for a haunting, this seems a bit tame, but Luke (Pat Healy) and Claire (Sara Paxton) are undeterred. The two hotel employees – the only ones on shift as the place is closing down – are also paranormal researchers. Luke has a website that he hopes to bring into the mainstream (GHOST HUNTERS for the Internet) and Claire thinks Luke’s research is fascinating. Young Claire is also totally geeked when former sitcom star and current spiritualist Leanne Reace-Jones (Kelly McGillis) checks in as a hotel guest. Claire’s enthusiasm prompts her to seek proof of the hotel’s resident ghost, even though Leanne, when pressed, expresses misgivings.

It’s a credit to West that he is able to ratchet up the creepy factor even once we know what’s going on, and that Claire and Luke are very credible characters in their semi-motivated slackerdom. Paxton gives an especially good performance as the young, bright-eyed Claire, playing her with a winsome energy and curiosity that propel the action. Healy finds the humor and pathos, along with the expected snarkiness, in Luke, who doesn’t want to show how flattered he is that his coworker takes him seriously and thinks he’s cool. McGillis fits well with this company as the prickly but modest newcomer to the situation.

It’s also fun to see an inversion of the by-now well-used documentary format. Claire and Luke are using audio/video equipment to record phenomenon, but we’re watching them, not the tapes, so that the camera and editing have freedom and we don’t have to wonder about who has cut things together or deal with the spatial limitations of “found footage.” The dialogue is easy and unforced, and the hotel itself looks both like a rundown business on its last legs and the plausible site of some supernatural doings – it’s a well-chosen location.

However, in setting up what is going on here, filmmaker West provides too many clues. Misdirection is one thing. However, we are led to expect more complexity than we get out of the fear-inducing but pretty straightforward climax. An epilogue doesn’t help and in fact makes things marginally worse by underlining a lack of character common sense that comes into play in the last portion of the movie.

Even so, THE INNKEEPERS is a decent entry in the haunted premises genre, contained and spooky.