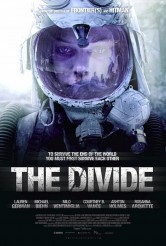 An apocalyptic, claustrophobic thriller that is grim and plausible, but neither empathetic nor viscerally frightening

There are a fair amount of post-apocalyptic films out there, but THE DIVIDE is one of the few that more properly can be described as mid-apocalyptic. The movie opens with a nuclear blast leveling New York City. Residents of a high-rise apartment building stampede down the stairs for the basement as the building starts to give way. In the end, only eight of them make it: mother Marilyn (Rosanna Arquette) and her young daughter Wendy (Abbey Thickson), couple Eva (Lauren German) and Sam (Ivan Gonzalez), half-brothers Josh (Milo Ventimiglia) and Adrien (Ashton Holmes) and unaffiliated Bobby (Michael Eklund) and Delvin (Courtney B. Vance). Building superintendent Mickey (Michael Biehn), a gruff, paranoid fellow who had fitted out the basement as his own personal bomb shelter, isn’t too thrilled with all the company from the outset, and things get worse from there.

Big things, like a traumatic incursion from what’s left of the outside world and exposure to radiation, and little things, like arguments over supplies, add to the stress. The survivors begin spiraling out of control in their individual ways, until only a few are left in a condition most of us would consider sane.

A lot of the practical issues brought up in the screenplay by Karl Mueller and Eron Sheean are quite believable. Xavier Gens (FRONTIER(S), HITMAN) stages the physical confrontations with lifelike brutality. He gets good performances from the cast, who launch into this with commendable dedication.

However, the filmmakers fail to make us truly care about any of the characters before the situation in the basement becomes critical. As the nature of the war outside is pretty irrelevant – these people are in big trouble, no matter who started it – we’re not concerned with finding out the global implications. This is fine, but when the suspense is restricted to who will flip out next and what will happen, we’re less scared and unnerved than we are merely curious. We endure a lot of unpleasantness, some graphic and some just implied – the combination of one character’s grief-stricken masochism and two other characters’ burgeoning sadism has naturalistic ickiness – in order to satisfy this curiosity. For a number of people, even those not easily put off by really bad behavior onscreen, the cost may not be worth the payoff.

THE DIVIDE seems intended as psychological horror, in that almost everything that happens is the result of direct human-on-human conflict, but we don’t get to know the characters enough to care about the deterioration of some and the moral survival of others. We’re not led to feel much empathy for anyone, nor much fascination with the details of what’s happening, although once two characters shave off their hair, they become surprisingly demonic-looking without any supernatural plot twists.

At its best, THE DIVIDE is creepy and claustrophobic, but it never rises to the level of being truly engaging or scary.