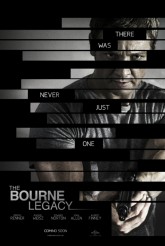 Jeremy Renner lives up to the legacy of the title, but the storyline doesn’t

In the BOURNE trilogy – 2002’s THE BOURNE IDENTITY, 2004’s THE BOURNE SUPREMACY and 2007’s THE BOURNE ULTIMATUM – Matt Damon starred as superspy Jason Bourne, who battled his way through amnesia in from the cold to force the agency that created him to stop hunting him and leave him alone.

It should be stated up front that, although Jason Bourne is much discussed in THE BOURNE LEGACY, the character and actor Damon appear only in photographs. Instead, we have Jeremy Renner as Aaron Cross, who, when we meet him, is very literally out in the cold on what he thinks is a training/test exercise in a remote area of Alaska.

Back at headquarters, a team headed up by Eric Byer (Edward Norton) is worried about fallout from Jason Bourne’s actions in the past few weeks, months and years. Byer concludes that the best way to avoid public scrutiny and other problems is to destroy every trace of the program that created Bourne, including other spies who were developed at the same time, and indeed, pretty much everyone who knows of their existence.

At this point, one of THE BOURNE LEGACY’s bigger story glitches appears. If this very secret government agency is so concerned about Bourne’s trail, why are they not still going after Bourne? Why, if the test subjects are anything like Bourne, do Byer and Co. suppose they’ll have better luck killing Aaron, especially once he deduces someone is out to get him?

Once Aaron realizes he’s a target, the mental and physical skills given him through government experiments allow to outsmart, outshoot, outrun and generally get out from under everything that is thrown at him. Eventually, Aaron hooks up with Dr. Marta Shearing (Rachel Weisz), one of the scientists who made him what he is, at which point both of them are on the run.

Without giving away plot details, Aaron comes into Marta’s life so abruptly that for about the next ten minutes, it seems that a reel may have been skipped in the projection order until things are explained (there’s a logical reason for Aaron’s presence, though his timing is still remarkably coincidental). Yet another logic strain occurs in the last act, with a development that seems contrary to what has been established so far.

Director Tony Gilroy, who co-wrote the script with Dan Gilroy, stages some very strong action sequences, even if some of them go on a bit longer than is advisable for momentum. Gilroyhas previously shown himself to be very adept with twisty plots and spy vs. spy turns, with MICHAEL CLAYTON and DUPLICITY to his credit as writer/director, as well as having written on all three of the previous BOURNE films. One can’t accuse him of being on unfamiliar turf – perhaps sections were cut out of LEGACY, or perhaps things that seemed reasonable on the page didn’t translate well to the finished film. In any event, the plot has too many holes that are lingered on too long for us to fully buy into the adventure here.

This is not the fault of actor Renner, who comes across as tough, thoughtful and decent as the beleaguered Aaron. Norton is very good as Byer, a man who has long ago decided that everything is permissible in the name of the greater good. Weisz’s role is underdeveloped – at least, exactly how Marta feels about experimenting on humans is pretty glossed over – but she is sincere with what she’s given.

There is also a rather strange disclaimer at the end that some of the scenes with animals were monitored by an animal welfare organization and that no animals in those scenes were harmed. This of course makes one wonder about what may have happened in the other, unmonitored scenes

This aside, with its swift action, good acting and handsome scenery, THE BOURNE LEGACY is diverting. It just isn’t gripping and the story mechanics don’t hold up to close scrutiny.