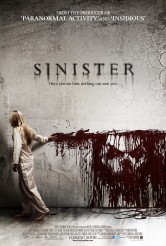 A scary film with a lingering impact

Sometimes a horror movie’s success can be best judged by how jumpy a viewer is on the way back to the car after the screening. SINISTER has a few strong jump scares, but mostly it’s a build of tension and what-the-hell-is-going-on-here. It has a few holes in its mythology, including just how all this got started in the first place (maybe the filmmakers are saving that for the sequel), but the idea is so creepy and the cumulative effect is so unnerving that it’s hard to deny that it works.

SINISTER starts with a grainy film clip of four people, their faces covered with bags, with ropes around their necks attached to a sturdy tree branch. Another branch on the tree is chopped down, causing the first branch to tilt upward, which in turns causes the four victims to hang, twitching and kicking.

This matter-of-fact, horrific start sets the tone of deep unease that pervades the film. We find out early on that the unfortunates we see being murdered are the Stevensons, whose little girl Stephanie vanished at the same time the rest of her family was killed. Writer Ellison (Ethan Hawke), who had a true crime bestseller a decade ago and is seeking to recapture or surpass his one-time success, is now working on a book about the crimes, with an emphasis on Stephanie’s disappearance. To that end, he’s moved his wife Tracy (Juliet Rylance) and their two young children Trevor (Michael Hall D’Addario) and Ashley (Clare Foley) to the town where the incident happened. Ellison neglects to mention Tracy, who already wishes her husband was in a more lucrative and less soul-exhausting line of work, that he’s moved the whole family into the house where the murders took place.

As if this isn’t enough, Ellison finds in the house’s attic a box with a bunch of Super 8 reels, each with an innocuous title, i.e., “Pool Party,” “Sleepy Time,” etc. These each show a different family, first doing mundane, happy family things, then being slaughtered by someone unseen in ways that relate to the titles on the reels. Rather than notify the police, Ellison doubles down on trying to find out what’s happened, eventually getting some assistance from a fannish sheriff’s deputy (James Ransome) and a somewhat perplexed occultist (Vincent D’Onofrio).

Let’s first address what’s not right here. SINISTER seems keen to emulate THE SHINING in its use of a flawed hero, but then sets up a mythology (hinted at by the ads) that suggests Elliott could be much less of a jerk without affecting the outcome. Structurally, it would be better if there were more correlation between his choices and what happens.

This aside, SINISTER is authentically disturbing. The scratched, silent, homemade-looking footage is rendered even more horrific by its matter-of-fact everyday nature. Some terrible things are shown, with others simply suggested by Ellison’s reaction as he watches, though we know enough to understand what he’s seeing. It sticks with you like news footage.

Then there is the matter of exactly how these films have come to exist. Suffice to say that “horror” is exactly the word to describe it, which makes SINISTER a truly strong genre offering. Some elements of the mythology remain obscure, but this may be a deliberate choice, so that there’s something left for a sequel to uncover.

Director Scott Derrickson, who cowrote the script with C. Robert Cargill, knows how to stage a jump scare when it’s called for, but he wisely relies largely on simply increasing tension brought about by quiet, intensity and the knowledge that something terrible is always waiting in the wings.

Hawke does a good job with the headstrong, insecure, ambitious Elliott, eager for another chance at the prize. Rylance does justice to both the loving and fed-up aspects of Tracy and D’Addario and Foley are good as the kids. Ransome finds surprising humor in some startling line deliveries and D’Onofrio is unconventional enough to add unpredictability to the exposition scenes. Fred Dalton Thompson provides folksy authority as the local sheriff.

SINISTER isn’t quite as scary as INSIDIOUS, which it resembles in a number of ways. However, as the latter set a very high bar, this isn’t a knock. SINISTER is increasingly frightening as it unspools and it stays with you afterward.