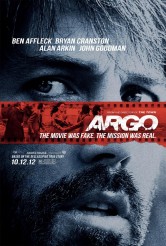 If those who don’t remember the past are destined to repeat it, those who do remember are largely destined to love ARGO, which gets its period specifics just right while simultaneously cranking the tension to eleven. This is pretty impressive, given that – meta-spoiler here – even if one is unaware of the historical incident, it’s hard to imagine a major studio making a big-budget film out of a story with a twist this absurd that resulted in tragedy.

It’s 1979. To emphasize this, ARGO opens not with the contemporary Warner Bros. logo, but with the lower-case “w” emblem that the studio was using in that era. A voiceover gives us the background on the situation in Iran, leading up to the deposing of the Shah, the rise of the Ayatollah Khomeini and the rise of animosity toward Americans in the country. This leads to an attack on the U.S. embassy in Iran. The story of the 444 days of captivity endured by most of the embassy workers is well known.

ARGO, however, tells a different, less-known but likewise true tale. As the U.S. embassy is being taken over by furious Iranians, six of the American workers manage to slip out and make it to the home of the Canadian ambassador Ken Taylor (Victor Garber). The C.I.A. would like to get the workers out before they are found and captured or killed. They enlist extractions expert Tony Mendez (Ben Affleck, also ARGO’s director), who has a spotless track record when it comes to removing people from bad situations and getting them home alive, but he’s never seen a scenario quite like this one. Tony finally comes up with “the best bad idea” of pretending that the sixU.S. embassy workers are really part of a film crew on a location scout.

To this end, Tony enlists the aid of John Chambers (played by John Goodman), the Oscar-winning makeup designer for PLANET OF THE APES, who has a history of helping the Agency. (This is all true, by the way.) In turn, Chambers brings Tony to producer Lester Siegel (a composite character played by Alan Arkin), who has a history of making what appear to be schlocky blockbusters. They aren’t really going to make a movie, they just have to appear to be making one convincingly enough that they’ll generate enough press to pass as a real production company. They find a science fiction script, “Argo,” which seems to be a rip-off of STAR WARS and any number of other high-profile projects of the day, have a reading in full costume and then send Tony to Iran to brief the six exhausted, terrified American refugees on how to behave like Canadian movie people.

Some of this is actually extremely funny, especially the parts set in Hollywood, where Siegel coins an unprintable nickname for the production. However, the opening sequences in the embassy are terrifying – director Affleck and writer Chris Terrio put us right in the position of the frightened office workers trying to figure out what to do as a wave of rage in human form is coming straight at them. Later, when Tony tries to get the six consulate workers to absorb their fake identities and then get them to pass muster in situation after situation, we feel the sweat.

There is a you-are-there feel to the whole movie that makes everything extremely immediate, urgent and personal. Even when we’re aware that events are being tweaked for dramatic effect, we’re still leaning forward intently, praying that everything works out in time.

Affleck is subdued as Tony, which is a believable way to go with someone who doesn’t want to draw attention to himself – he’s the anti-Bond. Bryan Cranston plays it straight as Tony’s CIA handler, yet finds comedy in the man’s exasperation. Arkin and Goodman are absolutely delightful as the Hollywood end of the plan, Garber is smoothly patrician as the man of conscience and Scoot McNairy is strong without going too far as the most doubtful member of the six needing rescue. His peers – Tate Donovan, Clea DuVall, Rory Cochrane, Christopher Denham and Kerry Bishe – are likewise effective.

ARGO uses restraint, but it also has phenomenal affection for the power of films to excite everyone – even people who don’t know they care about storytelling. For those whose lives and imaginations were affected ‘60s and ‘70s science fiction, this film is a warm acknowledgement of that influence. For any audience, it is a thriller that provides constant rising tension and actual thrills.