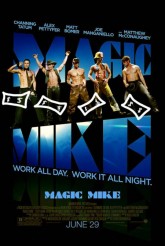 It should be noted that in a thoroughly unscientific poll taken by this reviewer, virtually every heterosexual woman queried wanted to see MAGIC MIKE. Most of them did not care what the plot was like, or whether there would even be a plot. This may demonstrate that there’s a relatively untapped audience out there eager for male eye candy, or it may just reveal something about the reviewer’s circle of friends and acquaintances.

In any case, it seems likely that MAGIC MIKE will satisfy the desires and expectations of this audience demographic. There certainly is a plot in Reid Carolin’s script. It moves along in unhurried style and makes an impression primarily as probably the least hysterical screenplay about strippers ever written. There are no scenes where aspiring dancers/actors are being told they’ll never make the big time; none of the characters in MAGIC MIKE seem to harbor any notions of any other type of performing, and nobody feels particularly ashamed of what he or she is doing, including the screaming females who pay to see the show. This begs the question of why can’t or won’t someone make the same sort of movie about female strippers, but that’s not a responsibility that should be set on MAGIC MIKE’s shimmying shoulders.

Title character Magic Mike (Channing Tatum) is trying to start a custom furniture business while working as a roofer by day and a dancer at Xquisite three nights a week. It’s on the former job where he meets Adam (Alex Pettyfer), a young man who knows nothing about roofing or dancing, but proves an apt pupil at the latter. Adam goes in almost no time flat from inexperienced backstage assistant to a star performer reveling in the money, sex and drugs that come with the gig. Mike, meanwhile, is enchanted by Adam’s no-nonsense sister Brooke (Cody Horn), who wanted her slacker brother off of her couch but didn’t quite envision him stripping to make that happen.

There are a few betrayals and moments of contemplation, primarily for Mike, which director Steven Soderbergh handles in gentle fashion. There is little to no backbiting in the Xquisite dressing room – ribbing, sure, but nobody here is crazy enough to worry about things like headline status or stolen routines. The one possible exception to the rule is Matthew McConaughey in a striking, ready for anything performance as club owner/manager/emcee Dallas. Dallas is a perpetually smiling businessman who knows how to handling performers, financial partners and lusty crowds. He’s not jealous of his dancers in the traditional sense, but he’s a born showman, able to give his all with the best of them.

Tatum gives a nuanced, very likable performance as Mike, who wins us over with his sincerity, decency and humor. Pettyfer is excellent as Adam (with nary a trace of his real British accent or affect). Horn is impressive as the watchful, no b.s. Brooke. Joe Manganiello, Adam Rodriguez, Matt Bomer and Kevin Nash make the Xquisite guys fun to hang out with backstage, and Gabriel Iglesias is strong as the club’s costume maker. The film’s costumer Christopher Peterson does a fine job of creating outfits that simultaneously celebrate masculinity and show off bodies

This brings us to the dancing. All of the actors are fearless and athletic, with routines that are both fun and humorous, thanks to Alison Faulk’s choreography. Tatum is particularly gifted, showing off a move worthy of a gymnast at one point.

Soderbergh plays with camera angles to indicate when characters are especially disoriented and gives theFloridaenvirons warm, saturated colors. He also gives characters their moments, allowing them breathing room, but events move along at a decent pace.

In story terms, MAGIC MIKE winds up about where we expect it will. The surprise is that it’s such an agreeable ride getting there, because the company is good and because we’re not being harangued on the evils of sex and drugs (and chapless dancing), albeit the flag is waved for being a responsible human being.

For those who don’t care about the assets cited in the above paragraph and are going to see MAGIC MIKE for other reasons, it dependably delivers.