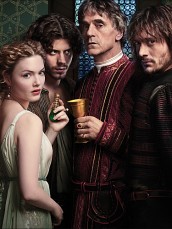 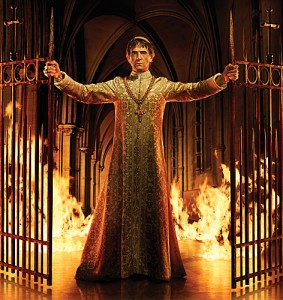 THE BORGIAS, Showtime’s epic series about the notorious family that flourished in Rome the late fifteenth and early sixteen century, ends its second season Sunday. Not to fear – Showtime has ordered a third season to air in 2013. Created by executive producer Neil Jordan, THE BORGIAS tells the story of what happened during papal reign of patriarch Rodrigo Borgia (Jeremy Irons), who was Pope Alexander VI from 1492 through 1503.

Season Two of THE BORGIAS began with a bang, or more precisely a burning, as one character was immolated inside an enormous representation of a bull in the episode “The Borgia Bull.” We caught up with Jordan’s fellow BORGIAS executive producer James Flynn, who talks with us in his soft Irish accent about this sequence and much more.

ASSIGNMENT X: What can you tell us about the burning bull sequence?

JAMES FLYNN: We built the bull and we burned it. It was burned live. The build took two to three weeks. The burning took about an hour and a half. That scene, we shot it very late at night. It was a night shoot that went through from I think eight in the evening until six in the morning. That scene I think of as the fall of the Roman Empire, when you see a death and the whole collapse and corruption, and there was a sense of collapse and decay and moral [failure] in that particular scene. And there was [reference to] THE WICKER MAN as well, those [people in the crowd] celebrating the burning of a person. There was something slightly supernatural and different about it, I think.

AX: Do you know how many extras were in that sequence?

FLYNN: About three hundred and fifty. We did some crowd duplication and things like that as well.

AX: How did you feel while making that sequence – stressed, excited …?

FLYNN: Actually, it was very liberating, because I do a lot of contemporary drama and you’re in natural locations, and when you’re dealing with very big sets – we have battle scenes, we have a burning scene – it’s very exciting, because you feel you’re actually there, you’re in the back lot where the buildings are, you have all the props and you’re actually doing it, so sometimes on a film set, I feel it’s real. There’s a camera crew, but that had such scale that you feel more connection with it.

AX: Did you have concerns about any of the logistics?

FLYNN: I’d be terrified with health and safety issues more than anything, because obviously, if somebody ever gets injured on a film set, or Heaven forbid, killed, there’s nothing [worse], so the biggest worry is health and safety. And then after that, it’s, “Will it catch fire?” I mean, sometimes burning something is not easy, and then you might have to do a little bit of artificial fire to get the initial [ignition], then you need to burn it. It’s quite a timing problem. Then you have people celebrating and upping the ante as it burns more. So I think timing is the problem, to try and match the performance with the burning, and then to film the different stages [of the burn with the crowd action]. So when I really kind of relaxed and had a glass of wine at three in the morning was when it was burning full-on and everyone was dancing and it was actually happening and there was nothing more to do, it was just going to burn itself out. I didn’t have to worry about anything after that.

AX: Can you talk about the pacing of the series’ plot? How many seasons can THE BORGIAS go before you run out of Alexander as pope? Could the story continue past his death?

In terms of pacing, I think Episode One of Season Two took stock of where it was. You had a situation where the Pope in Season One had been involved in a grab for power, and there are a number of things happening in Season Two which are impacting on him which are affecting his conscience. He’s beginning to think about his legacy. How is he going to go down in history? Having got [to the Papal throne], what does he do? So these doubts are creeping in. The conflicts he has from Season One with his conscience are emerging. We also have two arch-enemies emerging, the French king who is suffering from the pestilence in Naples, who is beginning to think about his revenge, and of course, Della Rovere [Colm Feore], who is the moral compass of the series, somebody who is totally against what Rodrigo/Alexander stood for.

FLYNN: We film it in five blocks, and each block is two episodes, and each block is four weeks, twenty days, maybe twenty-one days sometimes, if we have a particular set piece. So it’s very intense. One director is directing while another director is prepping. It’s very intense. So we take twenty weeks, maybe twenty-one weeks. We do pick-up shots and things like that. Strictly speaking, we shoot an episode in two weeks, but that doesn’t factor in the fact that we already from last year have all the sets and all the costumes. There’s a great amount of work already done in second season. So the physical filming takes two weeks. I’d say the editing takes two weeks by the director, two weeks by the producer, and then two weeks by the network. So [including post-production], eight weeks per episode. Allowing for the fact that we needed more prep time last year to build sets and costumes. It gets easier in the second and third seasons, because everything’s there.

AX: One of the set elements the production team built in Hungary is St. Peter’s Square …

FLYNN: That’s always there. That’s there for four years. Obviously, when it’s winter, you have to invest in maintaining the set. We also have negotiations with the studio, because other movies want to get in there. And these series never get greenlit until April, because you have to see how the ratings do. So everything is on hold until mid-April and then it sort of has to happen again.

AX: What will happen to the standing exterior sets at the end of the series?

FLYNN: The studio will have the set. That was part of the arrangement to attract us there, was they agreed to contribute to the cost of building the set. So that would be part of the assets. And it’s great to leave something behind.

AX: Besides Neil Jordan, who does a few BORGIAS episodes each season, where do your other episode directors come from? Are they people you’ve worked with, are they people Showtime recommends …?

FLYNN: It’s a combination. John Maybury was a friend of Neil’s, so Neil knew him. I knew that he had done ROME, so he had done some television as well. Jon Amiel – I had done TUDORS and Jon Amiel directed two episodes of TUDORS. So it’s kind of, Showtime has some suggestions, Neil has suggestions, I have suggestions. And there’s a lot of interest [from directors]. All the agents have been ringing us with their directors.

AX: Are there any specific elements of THE BORGIAS that you think viewers should notice more?

FLYNN: Cesare [Rodrigo’s son and chief henchman,, played by Francois Arnaud] – it really interests me with him as a character – the only time he smiles is when he sees Alexander make a decision, you see him smile in admiration. When he sees Lucrezia [Cesare’s sister, played by Holliday Grainger], his face lights up. But the rest of the time, he’s quite inward. He’ll do the odd, ironic sneer. But it’s great the way he lights up when he sees Lucrezia.

AX: What is the episode that you’re proudest of in Season Two?

FLYNN: I like Episode Two a lot, because it’s got this sort of Romeo and Juliet story within it. It really takes a break out from all the other stories and has a little fun of its own arc. I just like the fact that Neil would take the space to do that. Episode Five is pretty devastating. Episodes Five and Seven from an action point of view – if you love action, drama, war, violence, muscularity and grittiness, they are really powerful. And I would say Nine and Ten in terms of, those are fun in terms of intrigue, betrayal, corruption. So I’ll take Five and Seven very much from an action point of view, phenomenal stuff like set pieces, battles and really powerful special effects, visual effects. Nine and Ten just explode, really.