The actor talks humor and being "a worker among workers" 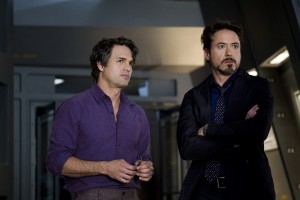 Of all the actors in THE AVENGERS, Robert Downey, Jr. has the most experience with his character Tony Stark, aka Iron Man. Downey previously played the billionaire genius inventor smartass in IRON MAN and IRON MAN 2, plus an uncredited cameo at the end of THE HULK. However, this is his first time sharing the screen with Chris Evans’ Captain America, Chris Hemsworth’s Thor, Scarlett Johansson’s Black Widow, Jeremy Renner’s Hawkeye and even Mark Ruffalo’s Hulk (Edward Norton had the role when Tony Stark last visited him). It’s also Downey’s first time working with AVENGERS writer/director Joss Whedon.

In person, Downey seems to have a certain kinship with Tony Stark – at least, the actor and his character share a similar sense of humor. Example: due to his stature in the film industry and his experience playing this particular superhero, not to mention the force of his personality, it’s been said that Downey was a sort of leader among the cast on the AVENGERS set.

Asked about this, Downey first replies, “I offered rides back and forth to Albuquerque,” where much of the film was shot, “on my private jet.” He laughs, then gives a more serious response. “Going back to 2007 when I was cast in IRON MAN and [executive producer] Kevin Feige said, ‘You know what this is all going to lead to – where we’re going to have all of these franchises come together from Marvel Entertainment and they’re going to make this AVENGERS movie.’ I just remember, I would get nervous about it and excited about it and doubtful of it.”

By the time it looked like AVENGERS was going to take flight, Downey says one of the things he was looking forward to was having more scenes with Samuel L. Jackson’s Nick Fury.

“I had a history with Sam and I was really wanting to capitalize on that,” says Downey Jr. “And by the time Chris [Evans] and Chris [Hemsworth] had launched their individual franchises with success and charisma, and by time we had Mark [Ruffalo] up, it was like, ‘Wow, you know what? This is really going to happen,’ so just being a worker among workers is kind of where I started out. It was nice to not really have to carry a movie. Everyone really – really, really, really – is equal in this venture. It’s great.”

Just in case anyone is expecting additional sincerity, Downey adds, “That will be my last serious answer.” 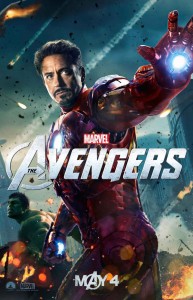 The fake name given to AVENGERS during filming was GROUP HUG. As far as what the actors did in their downtime while making AVENGERS, Downey asks his colleague, “Ruffalo, weren’t you the one throwing the roof parties?”

“Yeah, that was me,” Ruffalo acknowledges.

“So you were the group instigator,”Downey observes.

“I was the group hugger,” Ruffalo rejoins.

Recalling the most memorable moment for him in the making of AVENGERS, Downey says it was when all the Avengers first assembled.

”It was the first time that we were all assembled on the [airship] bridge and it was the time that we all saw each other and realized that we were probably likely to continue shooting the movie after we made good on this vision of Kevin Feige’s from as far back as I can remember,” says Downey Jr.

Downey then refers to what will doubtless be a memorable moment for anyone who sees the film. “And I have a question – how come it’s only Harry Dean Stanton that got to see Mark Ruffalo naked?” asks Downey Jr. “Anyone who has the answer, I’ll trade you one for it.”

For all its dramatic, world-in-peril underpinnings, there is also a goodly amount of comedy in THE AVENGERS.

“Again, in seeing it [at the U.S. premiere], I think what everybody captured, to a character, is the right tone,” says Downey Jr. “At a certain point, without killing it, you kind of tip your hat to, we don’t take it too seriously, this is essentially a comic book movie, but you find the reality of it. So I think everyone has their moments and I think Joss did a good job of finding everyone’s frequency, to [Captain America’s line] ‘I’m pretty sure God doesn’t dress like that’ before he jumps off is still within the realm of what Steve would say and do.” 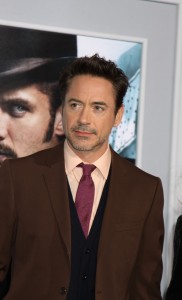 Downey also says he was impressed with all the action in the film as well.

“I think also, tonally, there’s this moment where they’re in the final battle and once [the Hulk] turns green, or once my helmet closes, we’re in upstate New York, not back in L.A., and these guys are on the ground and there was this whole huge sequence after sequence, and there’s all this stuff shot in Cleveland, and I don’t think we [as actors] ever had to go to Cleveland for one day, so I kept squeezing the missus’ hand during these incredible sequences that [the other actors] did, going, ‘They shot a lot in Cleveland,'” Downey explains.

“But there’s this moment when [the New York police are talking] to Captain – ‘Why should we take orders from you?’ – and then some of the aliens come in and [Captain America] handles them and the audience really appreciated that,” adds Downey Jr. “That to me was the moment where the sentiment of where AVENGERS could have fallen flat on its face and had people not be able to suspend their disbelief or get behind it any more – to me, that was the Act Three moment where we succeeded. And [this] speaks to Joss’ wit, whether the wit is funny, or whether the wit is actually being able to hold the whole myriad of ideas and notions that you have to get right for AVENGERS not to be bunk, is what he accomplished.”

What does Downey like best about his character Tony Stark?

“That he didn’t really set out to do anything noble, so he’s kind of in transition and so there’s something kind of a little more Han Solo than Luke,” admits Downey Jr. “Also, the fact that he can pull off wearing a Black Sabbath t-shirt for the better part of the film.”

In best Marvel movie fashion, Downey ends on a cliffhanger. “And not to keep you guessing, but we’re actually not done shooting,” Downey Jr. adds. “We are shooting one more scene tonight. Not kidding.”

And before anyone can ask about this statement, Downey quickly concludes with, “No more questions.”

Article: Will the AVENGERS shoot a new scene for the movie before its release? Robert Downey Jr. says so