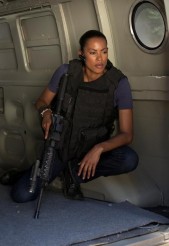 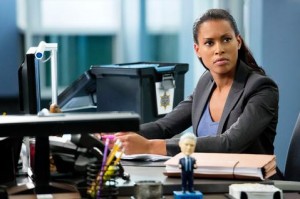 In TNT’s MAJOR CRIMES, which has its first-season finale tonight, Monday at 9 PM, a lot of characters in the Major Crimes squad room have had to make an adjustment. Their previous boss, Kyra Sedgwick’s Brenda Leigh Johnson on THE CLOSER, was a results-at-all-costs type. Their new supervisor on the spinoff, Mary McDonnell’s Captain Sharon Raydor, is a former Internal Affairs officer who’s a stickler for the rules.

However, for Kearran Giovanni’s character Detective Amy Sikes, who is new to the squad, Raydor is a mentor and a role model. They get along very well.

Giovanni worked on the daytime drama ONE LIFE TO LIVE, but up until now, she’s primarily been a stage performer, with nine Broadway productions under her belt, including CATCH ME IF YOU CAN, the revival of FINIAN’S RAINBOW and the concert HUGH JACKMAN: BACK ON BROADWAY.

ASSIGNMENT X: Were you and/or your character Amy Sikes ever on THE CLOSER?

GIOVANNI: I was not on THE CLOSER. Graham [Patrick Martin as Rusty Beck] and I are new regulars on MAJOR CRIMES.

AX: What can you tell us about your character?

GIOVANNI: Basically, I’m kind of the young gun on the show. I’m ex-military and I’m an undercover S.I.S. member and I come in with a little bit of conflict with G.W. [Bailey, who plays Provenza]  to shake it up a little bit, and I become part of the squad eventually and join the ranks of the police. She does a lot of undercover work, so you’ll see through the season that if there’s someone who needs to go undercover and use a gun, it’s usually me.

AX: Did you go through any particular training for your role?

GIOVANNI: I did. I actually worked with a man, Marcus Semos, who actually took me out shooting for about four hours on a Saturday and basically military-trained me with the weapons I use to enforce – an automatic rifle, a nine-millimeter Glock and a shotgun. I also grew up shooting, so it wasn’t anything new for me. It was near and dear to my heart.

AX: Any other kind of physical training?

GIOVANNI: You know, I have to say I’m lucky. I’ve danced and done gymnastics for twenty years. I’ve been on Broadway for ten years dancing. I take yoga, I take gymnastics still, and so I keep in shape with that. And the gun training basically helped me with my positioning. It helped me not look like a girl holding a gun. It made me look like I know what I’m doing and that I’ve been military-trained, as opposed to just cop-trained.

AX: What brought you from Broadway to television?

GIOVANNI: You know what? I’d done a bit of [television] in New York, and I was on a soap, ONE LIFE TO LIVE, for a few years. Broadway was my first love, because that’s what I trained to do, and I do sing and I do dance and I do act, but I think a lot of people on Broadway, especially that have been doing it for a long time, we kind of long for something else, and I always wanted to be here [in Los Angeles] – it’s just hard to make the move without having a wonderful job like this. So when this came along, and I read the character, and I read with [MAJOR CRIMES creator/executive producer] James [Duff], “This is it. I’m going. Let’s do it.”

AX: Any possibility that Amy may go undercover onstage in a musical?

GIOVANNI: I don’t know. I’ve been trying to convince them to do an undercover karaoke bar thing, so we’ll see. Maybe Season 2, she’ll go undercover and do some singing. Who knows?

AX: Were you familiar with Mary McDonnell’s work prior to joining this cast?

GIOVANNI: Absolutely. A, I was familiar with her work, and B, I’d only heard wonderful things about her, that she was kind of the Mother Earth wherever she went, and she’s been like a mom to me. She kind of holds my hand and teaches me and helps me through working her and being the new girl, and she’s fantastic.

AX: What’s the relationship like between your two characters?

GIOVANNI: You know, Mary and I were just talking about this when we started, that it’s nice to actually have two strong women on a show that aren’t at war, in conflict. We are both very much on the same boat and if you watch the show very closely, there’s always a look to each other, or an acknowledgement of each other, a mutual respect, and that’s really nice to have on the show.

AX: Captain Raydor is much fonder of rules than Brenda Leigh Johnson was. So your character is a rule-follower?

GIOVANNI: Oh, yes. If Raydor says it, that’s what goes, and yeah, I’m very much a military, straight-laced, follow the rules, check every angle kind of person on the show.

AX: Why are Amy’s relationships like with the rest of the people on the squad?

GIOVANNI: Funnily enough, Raymond Cruz, who plays Sanchez – Sanchez and I both have a lot of gun training, as far as our characters, and so he and I, if there’s any kind of dangerous situation or they need two people going in, it’s usually he and I that are going in together, and we do have a funny brother and sister relationship. He completely reminds me of my brother, and so we get along great, and so usually it’s he and I that are – our minds are always thinking alike, and usually you’ll see us together, doing a lot of things.

AX: Is there anything you’ve learned about police work since you’ve been on MAJOR CRIMES that’s surprised you?

GIOVANNI: Mmm. You know, on this show, we talk a lot about saving money and making sure that the police department doesn’t have to pay for things, and so you don’t realize that these things are also taken into consideration when you think about the death penalty or should we quickly put someone in jail, that there is a whole back story explaining that it’s the state’s money and how that actually comes into play when they make all these decisions [about what should happen to convicted criminals] as well.

GIOVANNI: I’m actually in pre-production right now, or I was right before I left [New York} City, for BIG FISH, which Susan Strohman is doing, which is [based on the Tim Burton-directed] movie [based on Daniel Wallace’s novel] that’s transferring to Broadway. So we’re creating the groundwork for that to be moved to Broadway in the fall.

AX: A lot of actors who are from stage talk about the fast pace of television, but you’ve done soap, which a lot of actors say is the most intense thing you can do as an actor.

GIOVANNI: Yeah. Broadway is definitely fast-paced, but we do the same show every night. Soaps – I do remember, I had just come back from maternity leave and I had sixty-two scenes in three days. So nothing can be that intense [laughs]. This [MAJOR CRIMES] is nice and smooth sailing for me. I love it.