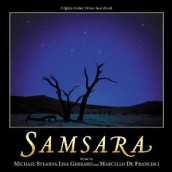 Where filmmaker Godfrey Reggio’s magical mystery tours through global cultures employ an all-encompassing, “scored” approach by Phillip Glass for any number of pictures ending in QATSI, his image-reliant counterpart (and former cinematographer) Ron Fricke instead had a lighter, and equally transfixing musical vision for his first film BARAKA, a similarly-themed metaphysical travelogue that used indigenous tunes and a meditative score by Michael Stearns to convey a world out of balance. Stearns is back for Fricke’s second feature after twelve years, with Marcello De Francisci and Lisa Gerrard added to the transfixing world music mix tape called SAMSARA, one way smarter and more beautiful than any east-meets-west grab bag that could be classified as “new age music.”

As visuals that reflect millennia-old wisdom are counterpointed with visions of worker ants in our cold-hearted technological society, a sense of infinite calm is brought forth with Tibetan horns, rhythmic drums, chanting voices and the sound of gently colliding brass, as conjured by instruments and missives to the gods that were likely created when mankind first felt the need to express its feelings through sound. And it’s exactly that urge which drives Fricke’s non-linear “story” as it were here, with the trio of tribally-minded composers using an altogether eerily peaceful blend of samples, percussion and prayer-like, undulating voice for music that tells us how far backward we’ve gone for all of our modern advances. SAMSARA comes across as a hypnotic mantra to turn reach back to our earth spirits, using just a little bit of trance hip-hop for a groovy culture clash.

With Varese’s issue of SAMSARA and their forthcoming, complete anniversary edition of BARAKA, Fricke’s soundtracks make for a timeless, haunting tone poems that meditate on the human condition, as swept up into a beautiful trance state.