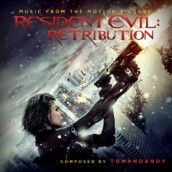 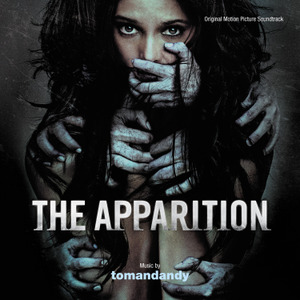 Horror scoring seems to be rapidly transforming into some ungodly beast, composed of mutated sound effects, shrieking percussion and shards of what stands for melody. Not that this raging sonic flesh is such a bad thing, especially when in the hands of Tomandandy. Known to their relatives as Tom Hajdu and Andy Milburn, this duo has been responsible for any number of innovative works for the genre, including THE MOTHMAN PROPHECIES, RIGHT AT YOUR DOOR and THE HILLS HAVE EYES. Now after accompanying Alice against the Umbrella corporation for RESIDENT EVIL: AFTERLIFE, the composers make that adventure seem positively sedate with the head-mangling, take-no-zombie-beast prisoner thrash of the franchise’s latest entry for RETRIBUTION, a fist full of anti-matter music that will delight fans and send anyone saner to their stereo with an axe.

If it’s at all possible for a RESIDENT EVIL picture to make even less sense, then RETRIBUTION takes the cake by being a succession of action scenes that are in the continual process of leveling up. Ditto Tomandandy’s work, with its standout cue featured on Milan’s album straight off the bat, as a strong theme combines with equally muscular percussion and orchestra for an arresting flash-backward title sequence. From that point on, it’s head banging insanity as rock-electro thrash emulates various alarm sirens, monster-kata, machine guns and behemoth roars, giving very little rest for the weary listener as one amped-up number after the other is unleashed, as if the whole album was a rave with green creature goo filling the neon glowsticks. There’s also an enjoyable throwback quality to the score for all the sophistication of Tomandandy’s technical work, a retro sound that could be playing for a 70’s synth-scored zombie flick, as heard though 2012 computer gear roid rage. But what ends up making RETRIBUTION more than a lot of cool music-noise is how Tomandandy are hellbent on playing up the mythic resonance of the unkillable Alice, with chorus and bold orchestral emulations, creating a horror superheroine supreme for an end effect that’s far more exciting than it is particularly scary.

Far more spooky and relatively sedate is THE APPARITION on Varese Sarabande, which is understandable given that Tomandandy is trying to capture a phantasm that likes to strike from the shadows, as opposed to waves of flesh-crazed zombies. It’s an approach more in line with the duo’s eerily effective score to THE MOTHMAN PROPHECIES, with melody a bigger presence in this effective mix of voices, electronic buzzing and a tolling piano, all of which tel us that something from the collective horror imagination has crossed over into our realm. Perhaps an even better title for THE APPARITION could be THE ATMOSPHERE, as Tomandandy puts more of a build into the materialization of this musical entity, playing a vast, creepily piercing soundscape that soon gives way to all-out percussive terror. It’s a score that will make you reach to pull a blanket over your head, as opposed to wrapping a finger around a machine gun trigger, not that there’s anything wrong with giving the supernatural a blast of hot sampled led.

Click on Link: To Purchase the RESIDENT EVIL: RETRIBUTION soundtrack