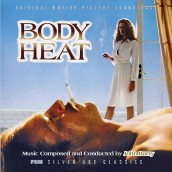 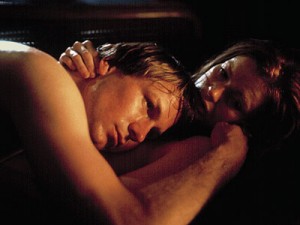 Few composers personify all things sex like John Barry. Not just the carnal act, but the romance and burning desire. It’s scoring as skin on skin, pure pleasure made through the jazzily lush fusion of brass and strings. When listening to this composer’s classic Kama Sutra, there’s no chapter that captures this mix of eroticism, emotion and danger with the sensuality of 1981’s BODY HEAT.

Lawrence Kasdan made a surprising move from penning the PG likes of THE EMPIRE STRIKES BACK and RAIDERS OF THE LOST ARK to writing and directing this then temperature-raising R update of classic 40s-style film noir, a brilliantly revamped DOUBLE INDEMNITY with a lot more illicit spice than could be offered in black and white. Almost unbelievably, BODY HEAT would also be Barry’s first real entry to the genre (with MASQUERADE and INDECENT PROPOSAL to follow). For while he’d played London swingers in THE KNACK, cheating mates in PETULIA and the tender stirrings of FIRST LOVE (as well as a one triple-numbered womanizing English agent), Barry had never done a true blue story of sex and murder. So it was understandable the he’d be as passionate in his approach as the patsy that knocks in a living room window to start a fling that will, of course, cost him dearly.

The same could partly be said for the John Barry admirers that’ve been trying to consummate their affair with the original recording of this score. One of the earliest underground “collectables” at the cusp of a new wave of soundtrack appreciation, BODY HEAT went from its ultra hard to find, and soon ultra-priced LP and CD issues on Southern Cross to receiving a good re-recorded version by Joel McNeely for Varese Sarabande, an album that’s stood as the easiest, and most affordable way to get some action for the last 14 years. Now Film Score Monthly issues the ultimate edition of BODY HEAT in an orgasmic, double-CD album that fans having been waiting for since first being hopelessly seduced by Barry’s iconic, sultry sax theme.

Before most serious genre salutes got way too hip for their own good,BODY HEAT demonstrated a knowing humor about its archetypes, no more so than in Barry’s opening melody, its alto sax floating over keyboards and an evocative orchestra, all beautifully timed to match the opening title’s dream-like dissolves of erogenous zones, just waiting for some ill-fated action. It’s scoring that floods you with the intoxicating smell of a femme fatale’s cigar smoke and perfume – even though it turns out to be a firebug’s smoke that oily lawyer Ned Racine (William Hurt) is sweatily watching after a tumble with some floozy. 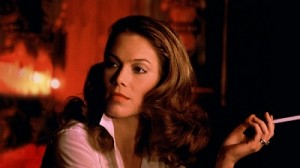 Barry immediately, and softly sets the vampy mood with both a wink and sultry elegance, cueing the audience into a tale as old as late show movie crime. And much like the six stages of finding out you’ve been done in for thinking with your little head, Barry charts Racine’s downfall to Matty Walker (Kathleen Turner) through irresistible urge, murderous anticipation, being appalled at the done deed, realizing the betrayal, getting payback and the final, grim smile of taking the fall. There’s a delightful, cocksure sax strut to “Searching for Matty” and “She Tries,” while Barry creates a deceptively vulnerable theme for her with “I’m Weak,” the sax lilting as keyboards glisten like the wind chimes outside her window, a torrid orchestra rising with the danger she promises. When the main theme pulls her cloths off, the melody packs the sweet, beholden satisfaction of Ned proclaiming “This is so right.”

But the couple’s sex hunger soon takes on more menacing shades with “Hey Lady,” bringing in a new, yearning theme that will be one of Barry’s many musical head games, music that makes him see her as victim instead of predator- much in the same, swellingly romantic way Bernard Herrmann played James Stewart getting taken for a ride by Kim Novak’s first false, hubby-suffocated incarnation in “Vertigo.” Here, Barry’s melody taking on an aching quality with “Busted” that brings in a sweep akin to his flying sequences in “Out of Africa.” With the “wind chime” motiff joining with piano in “Kill for Pussy,” Barry’s orchestra swells around Ned’s determination to lethally free Matty from her sleazy realtor husband (Richard Crenna), giving their plans a sense of near-giddiness. 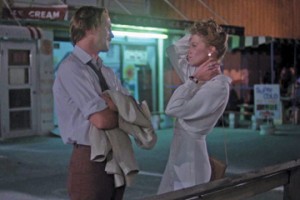 While Barry’s approach impressed for making the most of a few incredibly memorable themes, his incredible talents in this area never lacked for surprise, or orchestrational development, even within what could come across as just running with simplest of symphonic variations. BODY HEAT is a prime example of that incredibly ability, especially as “I’m Frightened” and “He’s Dead” brings in a new, piano and percussion “panic theme,” a musical time bomb as determined to go off as anything thing encapsulating a doomsday device that Barry had James Bond racing to stop. An organ swings in out of nowhere, further punctuating the suspenseful rhythm, while low, somber pianos realize the gravity of a crime that can’t be halted. This steady, ominous beat grows even grimmer with the string accompaniment of “Problem,” which serves as Ned’s tip off that things will be far from the clean and easy getaway that he deluded himself with. “Nothing We Can Do / Heather and Roz” slowly hammer in that slow, awful realization, the music also serving as crocodile tears for all of Matty’s protestations of being equally surprised by the chain of events that’s steadily unwinding their perfect murder.

With a calculation worthy of Matty, all of the themes that Barry’s plotted in his typically methodical way cunningly comes together as Ned desperately tries to get out of Matty’s spider web. But he isn’t going to trump this black widow. BODY HEAT‘s” finale “Better Get Him” is noir scoring at its best, building with grim power as Ned’s mind changes from giving his paramour the explosive deserts she’d planned for him, all while playing his detective friend’s reluctance at finally busting the lawyer gone wrong. It’s urgency as soaring, dark romance, before the suspense inexorably builds to the pre-destined big bang, as exclaimed for keyboard chimes and a panicked, yet regretful orchestra. But in pictures like this, false love never means having to say your sorry, as Barry’s main theme returns to tell us that there just might be some regret buried in this bitch, even as she reclines on a tropical beach while her patsy rots in prison, the sax and piano taking BODY HEAT out with a mocking sense of irony. 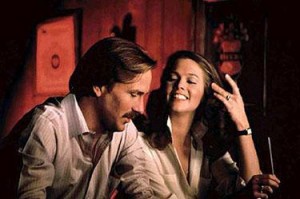 First released at 35 minutes (with the original soundtrack presentation on its second disc), the elongation of BODY HEAT to 48 minutes might not have the gargantuan impact of something like FSM’s complete BEN-HUR. However, it certainly reveals just how masterful Barry’s slow-burn musical architecture is, giving a bit of heavy breathing room that makes this classic score even more atmospherically luxurious. Disc 1 offers two score bonus tracks, with its biggest inclusion a number of source cues, beginning with the big, brassy band rendition of the standard “That Old Feeling” which certainly fills the hat shell where Ned first sees Matty. Barry continues with the sax of a 50s-style r & b number, the soul of a Hammond organ, a free-form jazz trio, adult contemporary and uptempo jazz bits. There’s a real delight to hearing Barry swing with the kind of stuff that was the gateway drug to film scoring, an opportunity he obviously enjoys here. Famed score session pianist Michael Lang is also on hand to contribute two pleasant solo pieces that are nicely chaste in comparison.

But perhaps the coolest, most unexpected inclusion of BODY HEAT‘s copious bonuses are 25 minutes worth of demo recordings on its second platter. While Barry’s initial sketches might obviously not have the full resources of an orchestra, there’s a wonderful, unplugged quality to his solo flute and sax players jamming with the synth keyboards, all sounding far more developed, and polished than you’d expect. There’s a somehow sweeter romantic tone to these pieces, never becomes tiring as they vary the main theme. Towards the end, these mock ups take on a vibe that’d be right at home in a cool cat night club, no more so than when they g from swing to full dance funk. Just call it this thoroughly entertaining section “Reflections on BODY HEAT” if you will.

Click on Link: To Purchase the BODY HEAT soundtrack