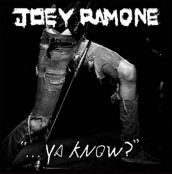 Eleven years after the Ramones frontman passed away, a new collection of solid unheard songs are reworked and released

When Joey Ramone, the frontman of the groundbreaking punk pop band Ramones passed away in 2001, 11 unreleased songs found their way on the posthumous release DON’T WORRY ABOUT ME.

While the songs weren’t as perfect as his days with the Ramones, they still were fun little ditties and allowed us to mourn, through music, the legacy Joey Ramone left behind.

Now, almost eleven years after his death, his second posthumous release is here. Titled …YA KNOW? (because Ramone always ended his sentences with those two words), the tracks consist of demos and other recordings he made throughout his time with the Ramones and after they broke up.

The tracks were spruced by longtime Ramones producers Ed Stasium, Daniel Rey and Jean Beauvoir with other tracks produced by Mickey Leigh and Joe Blaney.

At fifteen songs, this is the motherload for Ramones fans and it features two stripped down versions of Ramones classics “Merry Christmas (I Don’t Want To Fight Tonight)” (previously available on a Joey Ramone solo Christmas E.P.) and “Life’s A Gas.”

It’s the unreleased tracks that really showcase how eclectic Joey Ramone was – and feature stronger songs than were on DON’T WORRY ABOUT ME.

Kicking things off is “Rock ‘N Roll is the Answer” is a remnant from the 1980s and it’s given a 21st Century production sheen. It’s crisp and clean and sounds as if Joey never left us. Another stand out track is “There’s Got To be More to Life” which deals with life’s pitfalls. The lyrics like these are stronger and more affecting now that Joey has passed, particularly as he ends the song with “There’s got to be more to life than this/more than feeling like a wreck/there’s got to be more…”

“Going Nowhere Fast” is heavier Ramones, while “New York” city is a catchy ode to his hometown and “I Couldn’t Sleep” is classic “yeah, yeah, yeah” Ramones.

Something we’ve never heard before from Joey is the country-esque genre and we get that with  “Waiting For That Railroad”  and “Make Me Trouble”. The latter features Joey on guitar in a very vulnerable moment.

Joan Jett lends vocals and guitars to the great rave-up “21st Century Girl” and “Cabin Fever” also feels like Joey pushing his songwriting and trying something a little bit different.

The album concludes with an acoustic version of the aforementioned “Life’s A Gas” which wrapped up the Ramones’ farewell album iADIOS AMIGOS! In this stripped down version, it’s a more melancholy farewell from the punk pioneer. The lyrics are simple “Don’t be sad/’cause I’ll be there//don’t be sad at all/life’s a gas.”

I’m not sure what else is left in the vault, but these 15 songs are a reminder why Joey’s music still packs a punch and even with the scraps he’s left behind, he’s still more of a master at being a punk rocker than the bands that tried to emulate what the Ramones did after the fact.

Tags: ...Ya Know?, 21st Century Girl, CBGB, Daniel Rey, Don't Worry About Me, Ed Stasium, Joey Ramone, New York, Party Line, Ramones, Rock 'N' Roll is the Answer, There's Got To Be More To Life, What Did I Do To Deserve You, punk rock