Home » CD Review: I WAS A TEENAGE WEREBEAR soundtrack 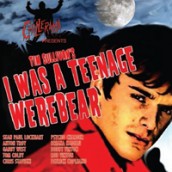 ©2012 Buysoundtrax Records
I WAS A TEENAGE WEREBEAR soundtrack
Reviews

CD Review: I WAS A TEENAGE WEREBEAR soundtrack

Creature Feature music gets a fun, gay spin for the furry locker room

First there was a CHILLERAMA album dedicated to Bear McCreary’s shit-kicking score for the ZOM-B MOVIE segment. Now Buysoundtrax continues the love for this Troma-esque drive-in goof by going from the funkily scatological to the absolutely gay 50’s tunes of I WAS A TEENAGE WEREBEAR.

Director and co-songwriter Tim Sullivan goes for a LITTLE SHOP OF HORRORS meets GREASE vibe, as put through the ROCKY HORROR raunchy double entendre wringer for this teenage coming out tale that would likely have made Michael Landon blush. Yet WEREBEAR‘s tunes are far more cute fun than anything else, with numbers like “Love Bit Me on the Ass” and “Do the Werebear (and Let the Werebear Do You)” possessing a high school musical exuberance that would be right at home on a very special, late night Halloween episode of GLEE.

Sullivan not only snags a golden oldie with Bobby Vinton’s “Where Were You When I Was 17?” but also gets the legendary crooner’s son Robert to do a catchy grind for “Sexy Ways.” Patrick Copeland’s score suite further nails the unhinged period ambience with swooning romance, creature feature organs, rockabilly guitars and beach bongos. Extra juvenile geek points go to Psycho Charger’s fun title track for CHILLERAMA, which uses the metal groove of ZZ Top to hilariously run-down of this quadruple bill’s horrendous events. It’s definitely enough to pack them in, in more ways than one, for the delightful doo-wop WEREBEAR.

Click on Link: To Purchase the CURSE OF THE WEREBEAR soundtrack