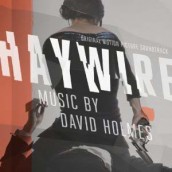 When Steven Soderbergh wants minimally surreal rhythms, he usually phones such eccentric operatives as Cliff Martinez (TRAFFIC) and Thomas Newman (ERIN BROKOVICH). Yet there’s only one musical agent he calls upon for his truly funky, mass audience-intended movies, and that’s British rocker David Holmes, the 007 with a license to kill it with his retro vibes for OUT OF SIGHT and three OCEANS pictures. While Holmes channeled 60’s r & b and 70’s Euro-sploitation vibes for those hustlers and con artists, the hit girl of HAYWIRE gets a groove that’s suitably more Roy Budd, channeling the lounge pop meditations of GET CARTER with pummeling fat jazz, as spiced with the echoing, improv sound of Miles Davis.

But Holmes doesn’t try so much to accompany the high kicks and karate chops of HAYWIRE star Gina Carano as much as he lays a groove bed for her mad action skills- though her acting charisma is another thing all together. For this surprisingly lackadaisical movie’s sake, actually trying to play some of this mixed martial arts stuff wouldn’t have hurt. But where Holmes’ work onscreen tends to inadvertently drone with far less interest than Newman and Martinez, HAYWIRE‘s hip wash is far more fun and interesting as a pure listen. Revealing itself as Holmes’ most thematic score yet for Soderbergh, this soundtrack makes for an alternately mellow and high-hat kicking jam session, with evolving levels of too cool for school weirdness making for one neat badass bitch’s brew.