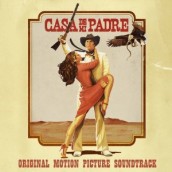 Will Ferrell and his satirical gang speak fluent Musical Mexican

It’s one thing to do a clever spoof of an inane genre, but it’s a whole other feat to pull off a soundtrack that’s at once the real musical deal (en Espanol no less) while letting the listener know its tongue is firmly planted in its ear. Will Ferrell’s hilarious “Mexican” movie pulls this feat off on all fronts, particularly with this song/ score compilation that leads with the one-two punch of having Kris Kristoferson’s narration jump into Christina Aguilera’s full-blast title ballad.

The earnest, well-produced tune jokes keep on coming, from El Puma’s Spanish spin on “A Whiter Shade of Pale,” to the tender guitar lament of Ceclia Noel’s “Del Ceilo,” and the equally elegiac title tune plucking and sax of “Hermano” by Tom Ferrell. His brother’s no slouch in the golden throat department either with the mournfully Shagadelic orchestra and organ vibe of “Fight For Love,” and the “Three Amigos!”-worthy campfire beat of “Yo No Se.”

But the biggest tip of the sombrero, and lion’s share of this dead-on album’s success goes to gringo composers Andrew Feltenstein and John Nau. After hooking up with Ferrell on his Funny or Die site’s short THE CARPET BROTHERS, the duo explore the full-on outer limits of retro Mexican cheese scoring. It’s a potpourri of menacing electric guitar licks, rockabilly blues, plaintive Spanish guitars, Mayan ghost choirs and swooning heartfelt strings- with the highlights being a pimp funk love scene, a poetic piano for a blood-drenched “Wedding Massacre” and a bizarre, jazz-topped “Trip Out” for a groovy near-death experience. Feltenstein and Nau hit a bull’s-eye with the scoring satire in this “Casa,” right down to the static fuzz of this pseudo-LP for a Telenova revenge exploitationer, as it brilliantly exists in Will Ferrell’s gonzo imagination.