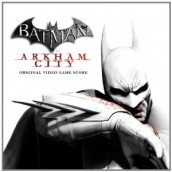 The crazies rule the musical bellfry in the latest BAT-game

It’s a very dark musical night when the bats are ruling the belfry, or in this case the unleashed, insane inmates of comics’ most infamous asylum- one that’s also become video gaming’s most acclaimed lock-up. Arkham’s gotten expanded to its own bizarro Gotham in BATMAN: ARKHAM CITY for the latest edition of the smash franchise, with Batman / Bruce Wayne trapped behind enemy lines. However, the most sonically important dual identity belongs to Nick Arundel, a man who’s served as the audio director and composer for both BATMAN: ARKHAM ASYLUM and ARKHAM CITY.

Given a powerful orchestral expanse in which to wage war against the criminally insane (along with Ron Fish as his musical Robin), Arundel’s greatest feat is summing up the cinematic scores that audiences have come to know the caped crusader by, from the stormy Wagnerian vengeance of Danny Elfman to the winged, rhythmic propulsion of Hans Zimmer and James Newton Howard. Arundel seamlessly meshes their styles into his own impressive work, with ominous choruses, furious percussion and an atmosphere of desperation and heroism that pits Batman against waves of old, evil friends, the music telling us they very well may get the better of him this time. With the sound of madness and do-gooding in the air, this metropolis is a memorable button-mashing entry to Batman’s musical canon in its own right.