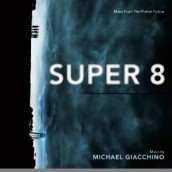 It was hard to whittle down the year’s best scores to ten top picks, let alone ten runners-up. Here are the best of a close batch of scores that are far more than second-runs, followed up by the budding composers to watch. 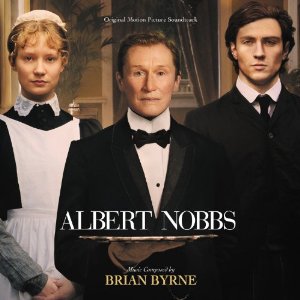 ALBERT NOBBS
(Brian Byrne /, Varese Sarabande)
Irish composer Brian Byrne takes up residence in 19th century Dublin for the upstairs/ downstairs cross-dressing-by-necessity of “Albert Nobbs.” While there’s a sprightly, Gaelic-accented classical sound to the happy-go-lucky strings and harpsichord that propels this not-so proper man of the hotel about, Byrne gradually looks behind the confident veneer to discover a lonely, terrified woman who just wants to literally fit in. It’s a poignant musical quest for acceptance that’s tremendously moving for its melodic vulnerability, nattily attired with a powerful, tenderly tragic theme and an especially resonant Sinead O’Connor lullaby that grants some measure of fairy tale acceptance to the film’s sad, yearning heroine. 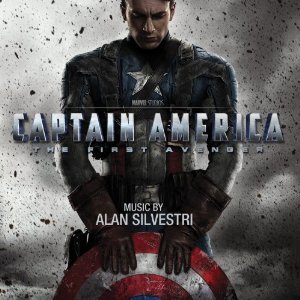 CAPTAIN AMERICA
(Alan Silvestri / Walt Disney Records)
With a knack for brassy, militaristic melody that’s given comic book-ish power to such muscle men as Arnold Schwarzenneger and Sylvester Stallone, Alan Silvestri’s innately patriotic action sound for the likes of PREDATOR and JUDGE DREDD just might make him Hollywood’s answer to John Philip Sousa. And that’s exactly the right qualification to suit Silvestri up with the wing-tipped red and blue of CAPTAIN AMERICA. It’s a smash entry for the composer into his first outright superhero score, capturing an earnest, golden nostalgia that gives tremendous, aw-shucks salute-ability to The Captain, while bringing in a techno element for the Hydra villains that make this thoroughly entertaining soundtrack anything but antiquated. Not I’m frothing at the mouth to hear what Silvestri will be bringing to the ultimate Marvel movie collection next summer. 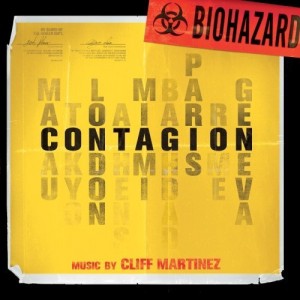 CONTAGION
(Cliff Martinez, Watertower)
If Martinez’s DRIVE score was about precise, mental control, then the composer’s “Contagion” is a score of a very different, and more palpably terrifying microbe. Here he unleashes truly queasy samples that sound like germs buzzing under our skin for sonically unnerving effect. And while Martinez’s trademarked percussion moves the pandemic along on its global scale, CONTAGION also differentiates itself as a far bigger orchestral beast, with simmering, snarling danger bringing back the long-thought cured 70’s noir sound of such musically infectious masters as Michael Small (THE PARALLAX VIEW) and Don Ellis (THE FRENCH CONNECTION). It a turbulent throwback sound that makes CONTAGION sound like a brooding conspiracy score, only one where a mass of disease cells are the supremely confident villains. Martinez’s grasp of that brooding style is indeed a cool musical virus to have back. 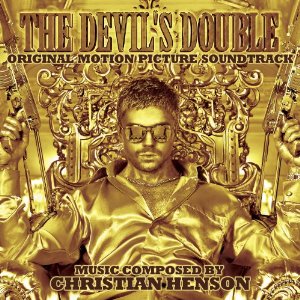 THE DEVIL’S DOUBLE
(Christian Henson, Lakeshore)
African and Middle Eastern movie music was hardly rocking in that trip-hop sort of way before Hans Zimmer turned a catastrophic Mogadishu military failure into a jam session with BLACK HAWK DOWN, setting the same furious ethnic beat for just about every similarly-themed score that followed. But leave it to Christian Henson to give it a new, darkly invigorating spin for THE DEVIL’s DOUBLE as he takes desert rhythms out for a sex and drug dance in the westernized hell club of Uday Hussein. It’s a vibe at once fearsome and invigorating, tantalizing Uday’s hapless look-a-like with the sinister, sensual grooves of a dictator’s sociopathic son. Yet the serpentine sounds of Arabic winds and drums are always there with the percussive force of conscience, reminding the film’s hero of the cost of a despicable good life in the midst of his country’s agony. Henson’s mesmerizing mix of trance grooves, harsh beats and ironic strings capture this moral quandary in the heart of darkness to powerful, captivating effect for one of history’s most unusual hostages. 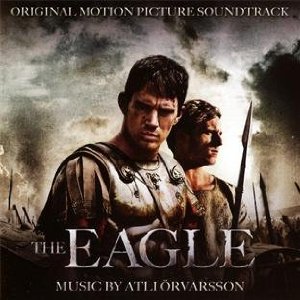 THE EAGLE
(Atli Orvarsson / Silva Screen)
While set in Roman times, THE EAGLE is far more of a visceral archeological adventure in the spirit of QUEST FOR FIRE than the Wagnerian, sword swinging thrills of GLADIATOR. Where QUEST‘s French composer Philippe Sarde took us on a rhythmically primitive tour of the stone age, Iceland-born Atli Orvarsson makes us feel like we’re on a dangerous, ethnomusicologist mission way behind Roman lines. With that empire’s warrior seeking a standard in the country that will become Britain, Orvarsson’s tantalizing use of such ancient instruments as Carnyx, Kamancheh, a ram’s horn, and a bag pipe for good Celtic measure, make this quest for THE EAGLE as tonally alien as it is fascinating, with more civilized strings to communicate a noble warrior in a forbidding land. It’s an action score packed with admirable authenticity, music that gives credence to the sword and sandal genre, along with this unexpectedly terrific film. 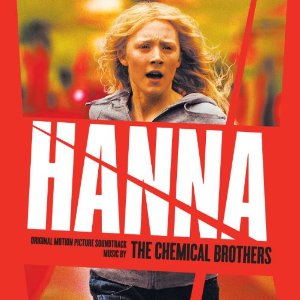 HANNA
(The Chemical Brothers / Relativity)
It’s hard to believe HANNA is the first actual film score to be delivered by these trance / industrial gods, especially when so many of their peers have been cranking out washes of grunge beats that annoyingly murder their pictures instead of supporting them. Not that the Chemical Brothers have done anything so different here, mind you. But for once, it’s a shrill, hyper-beat approach that’s completely right for a teen assassin created by super-science. Channeling the cold, high-tech rhythms of  THE ANDROMEDA STRAIN through the evil, cherubic nature of A CLOCKWORK ORANGE, the Chemical Brothers’ nerve jangling pieces piercingly shoot in the austere brutality of HANNA‘s twisted fairy tale, somehow conveying the traditional soundtrack structure of melody and themes in the process- with the one truly organic bit being a devilish whistling theme that   pervily pursues its killer babe through CIA-death Toyland. 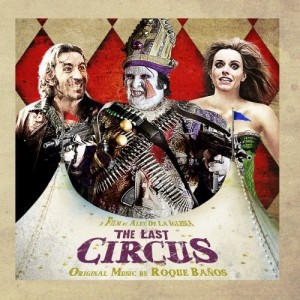 THE LAST CIRCUS
(Roque Banos / Milan)
From the Theremin guilt of THE MACHINIST to the mathematical madness of THE OXFORD MURDERS, few composers have resurrected the lush, Grand Guignol melodic approach of Bernard Herrmann like composer Roque Banos. But while it’s imaginable that the tormented maestro Banos channels so well could have scored those pictures, it’s also likely that Herrmann would have thrown a tizzy at the sex-obsessed, super-villain clash of the insane clown posse that makes for this lunatically entertaining film. Having long turned dementia into a thing of beauty, the crazed possibilities of this CIRCUS are something to be savored for Banos with gorgeous themes, screaming Spanish Civil War percussion and a gigantic, swooning symphonic climax that plays its over-the-top climax with all of the blazingly tragic grandeur its scarred crazies deserve. While Banos’ LAST CIRCUS score is likely to give another generation of kids clown nightmares, it’s musical catnip for fans of the Hitchcock sound on steroids. 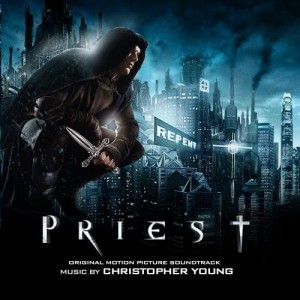 PRIEST
(Christopher Young / Madison Gate)
Christopher Young’s been obsessing with matters of heaven and hell since early in his career. Now he’s really gone to gonzo town with the thoroughly fun PRIEST, an anime-inspired flick that’s part western, part Catholic avenging superhero tale and an all-out vampire-beast flick. But if oriental genre stuff always seems delightfully off kilter when trying to play by the western genre rules, much can be said of Young’s very approach to scoring horror and science fiction. He’s one of the few American composers out there hitting these pictures with all the florid orchestral and choral stuff he’s got. Yet Young always has memorable themes to keep his bombastic excitement on track. Given its Godly hosannahs, hurtling excitement, snarling brass and feel of riding the undead range, PRIEST demands worship at the altar of Young’s symphonic horror raptures. 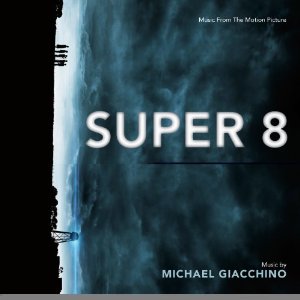 SUPER 8
(Michael Giacchino / Varese Sarabande)
Michael Giacchino truly got his start emulating John Williams’ RAIDERS  scores when he attacked the MEDAL OF HONOR videogames, coming up with a remarkable symphonic score that it redefined the genre’s possibility of equaling the polish, and power of any movie soundtrack. Now that Giacchino’s an Oscar-winning King of the Scoring World, it’s only fitting that he confidently puts on Williams’ shoes again, with all of the thrilling geek love that comes with it. Essentially creating the maestro’s score for the 1979 Amblin movie that Williams never got around to scoring for Spielberg, Giacchino pours on one definitive theme after the other for this stirring mix of menace and magic that fulfills filmmaker J.J. Abrams’ ambition of pitting a very pissed E.T. against THE GOONIES. Yet Giacchino’s own style comes roaring through loud and clear beyond his fanboy love, showing SUPER 8 as just one more reason why he’s Williams’ heir apparent when it comes to motivic, melodic and big-ass symphonic scoring. 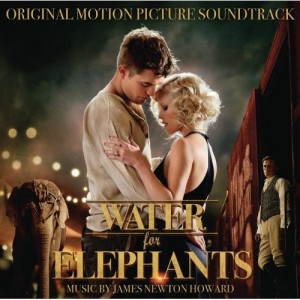 WATER FOR ELEPHANTS
(James Newton Howard, Sony Masterworks)
In the same way that John Williams gave humanity to a horse, James Newton Howard hears the big heart in a pachyderm. But where Williams was capturing the Irish and European arenas of WWI, Howard gets to play a more romantically magical, and acoustically rustic approach for ELEPHANTS‘ setting during our country’s Great Depression, topping it off with the era’s jazz for nostalgic measure. Howard’s WATER is an affecting musical fairy tale of innocent love and imperious villainy, as told through the devotion of an animal that’s used for good and bad. It’s a captivating musical spell that ends with a lyrical piano glow of hope for both the human, and animal condition, lyrical enchantment that earns its elephant tears honestly.

Forget it, Andrew and Simon Hale. It’s not “Chinatown.” But you can nicely hear it in a videogame score called L.A. NOIRE (Rockstar Games)

The Besnard Lakes preach to the ironic alt. rock choir in SYMPATHY FOR DELICIOUS (Lakeshore)

Click on link: The Best Scores of 2011
Clink on the link: More ASSIGNMENT X soundtrack reviews