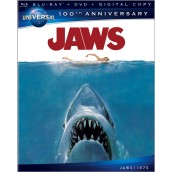 Yet another reissue of the classic 1975 shark film, this time digitally remastered and restored from the original 35mm elements

For those of us who have lived through the VHS incarnations, the DVD versions and the super special remastered DVD versions of our favorite movies, the excitement level for new format re-releases does feel anti-climactic at times.

That said, there are still a few movies that get the kid-at-heart excited especially when it comes to a Blu-ray release. The STAR WARS saga, the INDIANA JONES films and now, well JAWS.

The 1975 film is a classic horror film that has been aped and raped to no end by low budget schlockmeisters for the last four decades. Yet, for all the imitations (including three pretty bad and official JAWS sequels), JAWS still remains the gold standard. It has aged gracefully and director Steven Spielberg’s expert use of suspense (and limitations that prevented him from showing too much of the shark) has made this a film that is still hard to beat.

While the film has looked good on previous DVD iterations, this new look at an old friend was something that had to be seen.

The end result, as with many remasterings, is a mixed bag.

Yes, the film looks better than ever. However, looking better than ever also means that some of the imperfections from the original film used to mask some filmmaking choices are now visible for the world to see.

The biggest issue is the opening scenes on the water. They’re supposed to be night, but when the movie was made they shot the water stuff day for night. Yet, the remastered and color timing has brought to the fore the fact that it is clearly daytime, not night.

Yes, a minor grievance, but one that does take you a bit out of the film.

That said, most of JAWS is shot intentionally the daytime (a rare horror film that’s actually scary because of this choice), so the aforementioned high def restoration doesn’t continue to be as distracting.

In fact, I would say JAWS (the opening scene aside), looks the best it’s ever been. Tons of work has gone in to evening out lighting, fixing scratches and giving a pristine edition of a well-worn masterpiece.

The story follows new police chief Brody (Roy Scheider) who finds his tiny seaside community of Amity Island taunted by a man-eating shark. It’s summer and the local politicians don’t want to shut the beaches down, but when things get out of hand it’s up to Brody, marine scientist Hooper (Richard Dreyfuss) and Great White Shark hunter Quint (Robert Shaw) to take this shark down.

There are so many things Spielberg does right with this film – most importantly is letting the film start with a bang and then letting it build up its key characters from there. There are many small, but wonderful character moments that shine and bring a humanity to the proceedings. That’s why, when the film spends predominantly its latter half on a boat, you have really come to care for these characters.

The use of the widescreen frame and how every detail says something important is also why Spielberg deserved all the accolades he received from this film which also helped fuel the longevity of his incredible directing career.

The special features include a few Blu-ray exclusives including a brand new documentary on the impact and legacy of JAWS. The previous DVD incarnation had a thorough making of, so everything that’s been said, has been said and that two-hour making of is also included on this set as well.

Also included is restoration featurette that shows all the work that went into this latest incarnation of JAWS. It opens your eyes of how difficult it is to completely remaster an older film like this.

The remaining bonus features are cribbed from the previous DVD incarnations.

The best part about purchasing the Blu-ray though is you get a DVD version and a digital copy thrown in for good measure.

If you haven’t seen JAWS, this is the time to get the copy. A great film, an excellent package and a shark movie actually done right. Take that SHARKTOPUS!