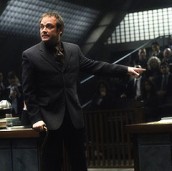 His actual father will play his father in the U.S. based episode as well

During the press event for DOCTOR WHO, journeyman actor Mark Sheppard commented on his character in the upcoming Season 6 series debut of the BBC show.

Sheppard is playing an American and his real-life father, William Morgan Sheppard, is playing an older version of his character in “The Impossible Astronaut.”

While Sheppard was mum on what his role is or what he will be doing in the episode, he thinks you’ll love it.