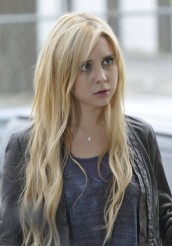 More from Pete and his Mom's past! 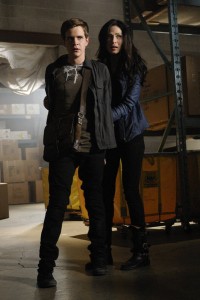 After a week off it’s nice to have WAREHOUSE 13 back! This latest episode “Shadows” not only manages to tell several different stories, it also brings the face of the conspiracy out of the shadows and manages to tie it all together with the current storyline.

Last episode Pete (Eddie McClintock) found out that his mother Jane (Kate Mulgrew) is a Regent. Not only is she a Regent, but she is now barer of a bracelet that acts as the last line of defense for the Warehouse and all of its precious artifacts. To say that he isn’t handling that information well is an understatement, so when the opportunity arises to go into his mother’s own memories with her, he jumps at the chance to discover what really was going on in his childhood.

Meanwhile, we have another science fiction guest star Alessandra Torresani (from CAPRICA) as Megan a girl who seemingly makes people evaporate with radioactive beams when she loses her cool. Myka (Joanne Kelly) and Claudia (Allison Scagliotti) are dispatched to investigate since Claudia’s other partner Jinks (Aaron Ashmore) got canned last episode for pulling a gun on Mrs. Frederic (CCH Pounder). There’s some interesting and twisty turny investigation involved in tracking down the artifact that is causing the people to die, and it there are some very nice conversations between Claudia and Megan in terms of being girls who keep others at arm’s length.

The trip down memory lane doesn’t go as planned but does reveal that the person behind the evil version of the Warehouse team is none other than Waler Sykes (Anthony Michael Hall) a young man who got totally screwed over and put back in a wheelchair when an artifact he possessed was reclaimed. By the way I am completely thrilled to see him on here, and I’m glad I was right about who the identity of our big bad was going to turn out to be based on the voice and back of his head from last week!

Love the trip down memory lane for Pete and his mom. There’s some very touching moments during this trip and we see Pete’s sister who is hearing impaired for the first time. Did we already know this and I just forgot? In any case seeing Pete’s dad was touching and finding out why his mother chose to return to being a Regent is a really nice moment.

Kate Mulgrew still remains one of my favorite actresses and I love her on this series! She owns the role completely and her chemistry with Eddie is perfect. You have absolutely no problem believing that they are mother and son, though honestly I think he’s a bit old to be her son in real life.

Only two more to go for the season and it all comes down to Carlo Collodi’s bracelet and the dream of a demented man to be a real boy once again.