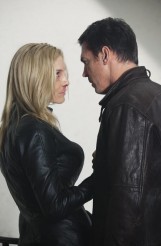 It’s about time the show finally grew some alien balls and jump-started an all-out human vs. V war 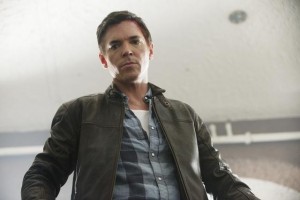 After a low point last week with the utterly lifeless “Concordia” episode of V, the show finally grows some alien balls to shake things up, kill off some characters and deliver a mission statement that probably should have happened a little earlier in the season.

Yes, “Siege” is what V has desperately needed – a cleaning house episode where everyone’s priorities and loyalties are readjusted. Plus, it’s a pretty clever hour of action television to boot.

The story begins with Fifth Column traitor Ryan (Morris Chestnut) being picked up by Fifth Column leader Eli Cohn (Oded Fehr) and tortured for double crossing the cause in “Concordia” by tipping Anna (Morena Baccarin) off to a planned assassination.

Of course, he was doing it for his child, but that isn’t enough. A traitor is a traitor.

However, Ryan’s capture is yet another elaborate plan by Anna to wipe out the Fifth Column – this time using the FBI to do their dirty work.

Somehow agent Erica Evans (Elizabeth Mitchell) gets caught up with Eli and is trapped in the building just as the FBI are ascending. So now, she must pretend to be a hostage, in order to keep her cover.

Her ex-husband Joe (Nicholas Lea) shows up too, led there by the V’s and it’s clear, one of them is going to die before episode’s end (and if you can’t figure out who that will be fifteen minutes into this episode, then you don’t watch enough television). That said, really, you’re getting rid of Lea already. Come on, he was a breath of fresh air on the show – a great actor who complemented Mitchell perfectly.

By episode’s end, Anna thinks she’s won – Eli Cohn and Ryan are blown up in the building (well, I bet Ryan found a way to survive, because he is still a regular cast member on the show). However, Eli gave Erica the blessing to be the leader of the Fifth Column and to do it her way. With her ex-husband dead and her son Tyler (Logan Huffman) headed back to the V-ship to continue his training, she’s now pissed off and fighting mad.

Naturally, she takes charge as the new leader of the resistance and doesn’t plan to sit idly by. She’s mad as hell, and she’s going to take Anna and the V’s down at all costs.

Throw in Father Landry (Joel Gretsch) being excommunicated from the Church, and even he is willing to be a soldier once again (he used to be one in Iraq).

Meanwhile, Anna’s daughter Lisa (Laura Vandervoort) doesn’t trust her mother and discovers her grandmother Diana (Jane Badler) is still alive and wants to team up with her to take down Anna.

One of the most surprising things in this episode is being reminded just how good an actress Mitchell is. She gets a huge amount of drama to play this time out – and she runs the gamut of emotions. She really is the heart and soul of this show, and it’s nice they’ve finally put her in a place where she can really show off what she’s made of.

“Siege” is a big episode filled with huge moments and some great action. It jump starts the damn show, which has found itself coasting a little too much during Season 2 and it couldn’t be soon enough.