Multiple villains – and Capes! – and a runaway train make this a highly enjoyable episode 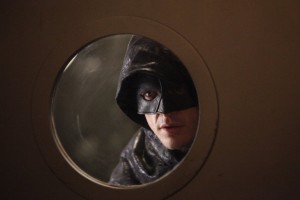 There are times when more really is more, as handily proved by THE CAPE episode “Scales.” Why go with one bad guy when there can be two, or even three, with that last one creating terrible moral conflict for our hero? Yes, Vincent (David Lyons) is at odds with Max (Keith David) here, while a feud between Scales (Vinnie Jones) and Chess (James Frain) creates a surprising unlikely alliance. It’s all great fun, especially the face-offs between Frain and Jones, who play perfectly at one another’s speed.

We already know that Dominic Raoul, nicknamed Scales due to an unfortunate dermatological condition, is a corrupt dockworker boss who isn’t too crazy about the Cape, but he’s not a big fan of Peter Fleming, aka Chess, either. Scales likes Fleming even less when the Cape points out that Fleming and Chess, being the same person, are essentially billing Scales twice for the same thing. Scales uses this information to twist Fleming’s arm (so to speak) for an invitation to a costumed charity gala aboard a moving train. With the Cape and Orwell (Summer Glau) trying to record Scales denouncing Fleming in public, things would seem to be hairy enough – and that’s before Vince realizes that Max and the Carnival of Crime are planning a great train robbery.

Add Richard Schiff in his recurring role as Secretary of Prisons Portman turning up in uncommon garb, and “Scales” is so much fun that there’s no need to second-guess William Wheeler’s teleplay. The upper hand changes here from moment to moment, but there’s always a good quip and a better grin at the ready. Jones finds such righteous indignation in his portrayal of Scales (some flashbacks help establish that he’s got real cause for grievance) that we’re half on his side, and Frain (despite Fleming’s protest to the contrary) has a delicious sense of humor and whimsy. Separately, both actors are engaging; together, trading threats and class insults, they’re delightful.

The longer game here is Vincent’s appalled realization that he can’t really ignore what Max does with much of his time, and the intriguing question of why Max is so keen to have the cape in the hands of this upright ex-cop. Answers are not immediately forthcoming, but the issue is presented in a way that makes us interested in finding out what they are.

There is the potential for real silliness here, but there’s also a lot of style, wit and a sense of actual joy, attributes that would do credit to any series.