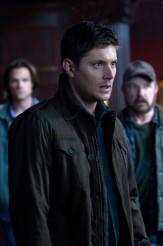 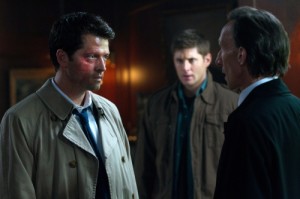 There’s nothing like a huge cliffhanger that picks up right where it left off, which is what we thankfully get with SUPERNATURAL’s Season Seven premiere, “Meet the New Boss.” Season Six ended with the angel Castiel (Misha Collins) ascending to godhood after ingesting all the souls in Purgatory. Castiel then demanded that the Winchester brothers, Sam (Jared Padalecki) – who had just stabbed Castiel in the back – and Dean (Jensen Ackles), along with their friend Bobby (Jim Beaver), kneel before him and profess their love.

It’s always gratifying when characters don’t act like total idiots (and, let’s face it, on SUPERNATURAL, sometimes they do). For once, Dean, Sam and Bobby all just sensibly comply with this new God’s demands, but Castiel decides it doesn’t mean anything if their hearts aren’t in it. He doesn’t kill them, but tells them to stay out of his way. For awhile, they actually do so. But Castiel starts smiting people right and left, though not for the reasons one might necessarily imagine. Castiel (agreeing with what is likely a large portion of the audience) objects greatly to those who falsely claim to speak for God. Alas, Castiel also extends his wrath to campaign staffs and misguided but generally harmless followers. Sam and Dean decide they have to do something about this, and try to force Death (Julian Richings) to help them. This backfires, though not lethally for our heroes. Castiel feels the souls from Purgatory, including those of some ancient monsters, acting up within him. He finally comes to the conclusion that he was wrong to seek godhood and apologizes to Dean and Sam. All of them together use a spell to open the way to Purgatory. Castiel vomits all the Purgatory souls back from whence they came, then appears to die. Dean is grief-stricken. Castiel opens his eyes and says there are still some souls inside him. He then seems to die again – but then wakes up, all better. Unfortunately, he is now being operated by the Leviathans, ancient malevolent creatures that predate humanity. Uh-oh …

Some side plot notes that look like they’ll figure heavily in future episodes: before his fall, Castiel reinstates the wily Crowley (Mark Sheppard) as Lord of Hell and Lucifer (Mark Pellegrino) appears to Sam and says that Sam has only imagined escaping from Hell and that he’s still in the cage with Lucifer and the angel Michael.

One’s reaction to the episode is likely to hinge greatly on whether/how much one values Castiel as a character and as a means of moving the plot forward. Having a virtually all-powerful character available to answer questions and fix things often required huge amounts of explanation as to why he wouldn’t or couldn’t help, in order to give the Winchesters something to do. Removing the deus ex machina from the scene clearly takes that burden off the writers. However, we as well as the Winchesters will miss the big trench coat-wearing galoot.

“Meet the New Boss” has some cool visual flourishes, like a shot where we see a field strewn with the bodies of dead angels with their wings spread after Castiel has wrought vengeance upon his Heavenly enemies. Some of the scenes of Castiel going after the truly annoying are funny, and there’s a nice bit where Castiel heals a blind man, showing there’s more to him as a deity than anger.

One may quibble as to why Lucifer is showing up looking like Pellegrino – after all, Pellegrino’s incarnation of Lucifer was in a body we know he borrowed before he got into Sam. The answer to this is, if you’re making just about anything and Pellegrino is available and there’s a reason to use him, you’d be silly not to do so. The SUPERNATURAL producers are not silly in such matters, and Pellegrino is a thoroughly welcome, calm villainous presence.

“Meet the New Boss” has a pretty breakneck pace, and it’s mostly good, though Sam and Dean trying to force Death to do their will – while it makes for a fun scene with the always enjoyable Richings – makes us question their intelligence yet again. It also suggests that both Death and Castiel-as-God have reserves of patience well beyond mortal ken as they refrain from killing Sam and Dean yet again after great provocation.

“Meet the New Boss” ends as it started, with another cliffhanger. Bring on the Leviathan conflict!