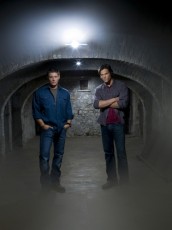 This was the type of episode on SUPERNATURAL that separates this show from the rest of the schlock that is on television at the moment.

Where most shows might bypass or gloss over the fact that one of its major characters was a soulless, brutal creature hunter for a year, SUPERNATURAL does it in style and capitalizes on this aspect of its characters in order to provide great storytelling and further the mythology of the show, but in a highly enjoyable way.

“Unforgiven” deals with the consequences of Sam’s (Jared Padalecki) actions while he was soulless and running around with Samuel (Mitch Pileggi). Obviously, a year passed before Sam came back into the life of Dean (Jense Ackles) and that’s a lot of time to do some dastardly deeds.

One of these deeds had to do with a small town in Bristol, Rhode Island where Sam and Samuel had a run in with a spider-woman that kidnapped a whole slew of men. After getting to know the town’s sheriff and his wife along with Sam sleeping with half the female population of the small town, they track the spider lady down where she is nearly about to have a man-snack and cut off her head. But beyond Sam’s carnal knowledge in the town, he decides to kill the men that were kidnapped instead of trying to save them.

Fast forward to right now and Sam gets text messages pointing him in the direction of Bristol and a slew of women are disappearing in the town. The problem is that Sam has no clue about what he did during the time he didn’t have a soul … well, until he begins to have flashbacks to that time he was in the town and put the pieces back together.

Seeing what Sam did during his time without a soul shouldn’t surprise any of us given what he did to Dean and what he planned to do with Bobby (Jim Beaver). But the weird thing was the reactions of Samuel. Wasn’t this the same guy working for Crowley (Mark Sheppard)? Wasn’t this guy the same person that hunted down loads of beasts and killed them in order to work out the deal he had with Crowley? Why was he so tentative and saying things like “I don’t usually work like this” when Sam wanted to use the sheriff as bait? It seems a bit out of characters.

I hope we get to see more of these “evil Sam” moments in the future as they not only give us insight into what he did during the time he was away from Dean but it also gives us a good hook to chip away at the wall that Death put up to keep the bad thoughts of being in Hell away from Sam. Obviously, this was something that we saw happen at the end of “Unforgiven” where Sam had a flashback to the Pit.

How long does Sam have if already he is having issues? Will they find a new way to patch his soul? Or will he just have to deal with it? And am I the only the one looking forward to evil mannequins next week?