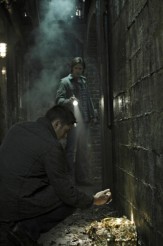 Sam gets his soul back and dragons unleash … mother nature?

I’m very happy that SUPERNATURAL is back.

No other show on TV makes me laugh and keeps my interest as much as this show does. And “Like a Virgin” had ample amounts of comedy and compelling storytelling.

This episode had two purposes for overall mythology and second half of SUPERNATURAL. One, provide a follow up to Sam (Jared Padalecki) getting his soul back into his body. And two, introducing what I believe will be the second-half of the season’s main bad guy.

And would you believe that it might just be Mother freaking Nature – at least an evil version. Although this isn’t yet confirmed, calling the one who has brought all the beasts into creation – from vampires, to werewolves, to mutants, to invisible creatures, to dragons and more – “mother” seems to allude to the fact we are talking about a Mother Nature type of being.

It is probably the one area of any mythology that SUPERNATURAL has yet to cover. We’ve already had the battle between Heaven and Hell (with angels and demons both), a variety of creatures that the Winchester brothers have fought as well as demons, not to mention hints from Death that before all of this there was much more to the universe. Why not Mother Nature? Makes sense to me.

With the desire to find Purgatory already expressed by Crowley (Mark Sheppard) and control that part of the otherworld being undertaken by demons of Hell, it makes sense that the creatures of the Earth would rally and try to bring about the one that created them in order to fight the battle.

Of course, the Winchester brothers are caught smack dab in the middle, but at least Sam is back to being himself – at least for now. After getting his soul back in the deal Dean (Jensen Ackles) made with Death, Sam has no memory of the last year being on Earth and doing the dastardly deeds he did while he was soulless.

That is, until Castiel (Misha Collins) spills the beans about it. This actually went over much better than I expected. Considering Sam is already on thin ice with his tortured soul being blocked by a wall put up by Death to keep all the bad stuff out, he took it rather well. And with no real time table about how long that wall will hold I wonder if we will begin to see cracks in the armor this season or will they save that for another season (assuming there is one)?

Of course, they have pretty much glanced over the long months that Dean spent in Hell being tortured and disturbed. He came out of it pretty much the same after just some discussion about it. So with that as a precedent, they could have a few episodes dealing with and then move on. Dean sure doesn’t ever talk about it or show any signs of it being something that labors at his conscious – which in reality is probably not how it would be given what he told Sam about the ordeal.

But for now, the real Sam is back and that’s good because I don’t think anyone liked the soulless Sam that was cutting deals with Angels, sucking his own blood, allowing Dean to become a vampire and nearly killing Bobby (Jim Beaver).

I’m sure we’ll see more of this as we move along in the second part of Season Six and how it will impact the way the brothers act toward another and fight Mother Nature (or whoever she might be).