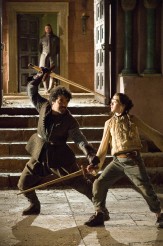 The winds of war are blowing strong, though armies are not quite clashing yet in “The Pointy End” (a sword reference), a GAME OF THRONES episode that sets up what seems to be the conditions for all hell breaking loose next week. The Lannisters and the Starks muster armies to clash in the South, while up in the North, the Night’s Watch gets frightening proof of the White Walkers and across the sea, the Dothraki make preparations to invade. It’s all very intriguing, especially because our sympathies are being tugged this way and that.

With her father Ned Stark (Sean Bean) in the King’s Landing dungeon for treason, older Stark daughter Sansa (Sophie Turner) is pressed by Queen Cersei Lannister (Lena Headey) to send a message to oldest Stark son Robb (Richard Madden). The letter says that the only way mercy will be extended to Ned is if Robb comes and swears fealty to the new king, Cersei’s son Joffrey (Jack Gleeson). Sansa maintains that her father must have been confused in trying to prevent Joffrey’s ascension to the throne – Joffrey says he may show Ned mercy if Ned acknowledges Joffrey as rightful king. Neither Joffrey nor Sansa are aware that Ned’s opposition to Joffrey stems from the knowledge that Joffrey is not the son of late King Robert, but rather of Cersei and her twin brother Jaime (Nicolaj Coster-Waldau). Meanwhile, Ned’s younger daughter Arya (Maisie Williams) escapes the Queen’s men and finds her sword, using it to defend herself from a dangerous boy who she winds up killing almost by accident.

Robb is affronted by the summons and decides to head toward King’s Landing with an army at his back, consisting of all the lords and their men who have pledged loyalty to the Stark family. Robb’s mother/Ned’s wife Catelyn (Michelle Fairley) meet him and his army on the road after Catelyn unsuccessfully tries to get his sister to commit more knights to the cause of freeing Ned. Catelyn and Robb both know that if they lose, the Lannisters will kill the entire Stark clan.

Tyrion Lannister (Peter Dinklage) and his new ally Bronn (Jerome Flynn) are accosted by the Stone Crow tribe, but Tyrion offers them payment if they’ll spare him – part of the payment will be the Vale, which is currently the territory of Catelyn’s sister, who tried to have Tyrion killed. Tyrion and the Stone Crows make their way to the Lannister encampment, where Tyrion’s father Tywin (Charles Dance) isn’t especially pleased to see Tyrion. The Stone Crow chieftain insists that Tyrion fight alongside them if they are to join the Lannister army.

Across the sea, Dothraki chieftain Khal Drogo (Jason Momoa) plans to buy ships by capturing slaves to trade for money. Khal’s wife Daenerys (Emilia Clarke) uses her authority as Khaleesi to stop the rape of the new female slaves, claiming them for her own. When one of Drogo’s men objects (and insults Daenerys), Drogo doesn’t even bother to arm himself as he fights and kills his erstwhile subject.

Up at the Wall, Jon (Kit Harington) is provoked into trying to strike a senior officer of the Night’s Watch, a potential hanging offense. However, Jon redeems himself by rescuing the Commander of the Night’s Watch from a nearly unstoppable reanimated corpse. Jon’s friend and fellow Night’s Watch steward Samwell (John Bradley) has read that victims of the White Walkers come back in this fashion, which puts fear into all of the Watch.

So to sum it up: the Lannisters might win the war, the Starks might win the war, the Dothraki may come over the sea and vanquish everybody, or the Walkers may make it over the Wall and obliterate the known world. Or all of it could happen. We love Tyrion, though the rest of his family is pretty awful. We’re fond of the Stark clan. And it’s hard not to like Daenerys and Drogo, despite Drogo’s bloody, slave-taking ways – they’re certainly forthright with everyone and apparently sincerely loving with one another. Given what we’ve seen the Walkers can do with their victims, we can’t wait to see an actual Walker – though we worry what will happen to our friends at the Wall when we do.

One of the most interesting aspects of “The Pointy End” is that it’s written by George R.R. Martin, who also penned the novels that are the basis of GAME OF THRONES. “The Pointy End” is tonally and stylistically of a piece with all the episodes that have preceded it, which illustrates that the other writers on THRONES seem entirely in tune with author Martin’s original creation.

Highlights here include the fight between Drogo and his rebellious soldier, Anya’s sword teacher defending her from a horde of soldiers, Jon’s encounter with the dead man, an eerie interlude of prayer with young Bran Stark (Isaac Hempstead-Wright) and of course (as usual) pretty much everything with Dinklage’s well-spoken Tyrion. ROBIN OF SHERWOOD fans will be pleased to see the estimable Clive Mantle turn up in a solid supporting role as one of the clan leaders who supports the Starks.

“The Pointy End” is an exciting episode that leaves us eager to see what happens next.