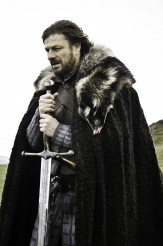 Beautifully realized and immediately engrossing, a series with world enough and time to achieve the scope of its story

Let’s be honest. Most opening episodes of series tend to drag just a little while we get to know everyone. Not GAME OF THRONES, which starts off with a medieval horror-movie prologue and then swings into its full-tilt approach to dimensional characters dealing with some extremely complex yet readily understandable situations.

In the Seven Kingdoms of Westeros, ruled as “Winter is Coming” opens by King Robert Baratheon (Mark Addy), a great in the far north protects the realm from the evils on the other side. At least, that’s what the wall is supposed to do – as several unhappy members of the Night’s Watch discover while on patrol, it appears that the dreaded White Walkers may be back after being gone for millennia.

Eddard Stark (Sean Bean), Lord of Westerfell and friend of the King, has other things to worry about. With the death of the King’s former aide – also Eddard’s mentor and brother-in-law – Robert brings himself and his family, including Queen Cersei Lannister (Lena Headey) and her two brothers, Jaime (Nikolaj Coster-Waldau) and Tyrion (Peter Dinklage), to Westfell. The purpose of this visit is to bring Eddard back to the capital as the King’s new advisor/protector, a move which Eddard’s loving wife Catelyn (Michelle Fairley) staunchly opposes.

Eddard’s bastard son Jon Snow (Kit Harington) wants to join the Night’s Watch to get away from the oppressiveness of not being quite part of the family, while Eddard’s 13-year-old daughter Sansa (Sophie Turner) is only too happy at the prospect of being wed to Crown Prince Joffrey (Jack Gleeson) to secure a family blood bond between the Baratheons and the Starks. Besides some tumult within this crowd, there’s also a threat from a tentative alliance between Viserys Targaryen (Harry Lloyd), whose family used to hold the throne, and barbarian lord Khal Drogo (Jason Momoa), who weds Viserys’ reluctant but dutiful sister Daenerys (Emilia Clarke).

If that sounds like a lot to wrap one’s mind around, never fear – writers David Benioff & D.B. Weiss have adapted George R.R. Martin’s novel series, beginning with A SONG OF ICE AND FIRE, in a way that is memory-friendly. The way in which all the characters relate to one another reminds us continually of who they are and where they stand with each other, as well as what the stakes are.

Director Tim Van Patten paces things at a gallop, so that we’re always invested in what’s happening and listening closely to what’s being said. We’re also watching truly gorgeous production design and cinematography, the kind that lets us feel that if we strayed beyond the edge of the frame, we’d still be entirely within the world created here.

Standouts in the huge cast at this early point include, well, pretty much everybody, with Bean, Dinklage and the stunning Clarke as foremost focal points.

It should be noted that with beheadings, disembowelments, lots of nudity and plenty of non-missionary sex, this is not a show for standard children. However, GAME OF THRONES exquisitely treads the line of being serious without being somber, avoiding the nasty fate of too many genre shows that equate pomposity with grandeur. This makes it a show for pretty much anyone of age who loves good television. In “Winter is Coming,” GAME OF THRONES demonstrates that it can bring epic serialized fantasy not merely to the screen, but to vital life.