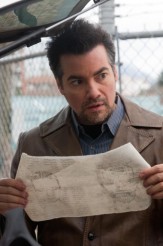 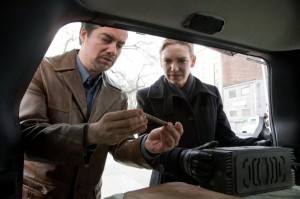 Do you believe in fate?

We’ve been given a lot of science and experiments on FRINGE but we finally have the first glimpse of fate playing a role on the show in “The Last Sam Weiss.”

Olivia (Anna Torv) has a connection to the machine. Not just any connection, but a connection that will allow her to help Peter (Joshua Jackson) enter the machine to control it. And this has been prophesied for a very long time. So was it fate that brought Olivia and Peter together or just a series of events that have led them to this moment? Obviously, being a TV show it is easier to say that fate is the answer because it is scripted as such.

And their connection goes beyond that – in the first season when David Robert Jones set up a test for Olivia in order to test her abilities that she garnered from withstanding Walter’s (John Noble) test, Peter was with her when she shut it down. When Olivia tried to type a phrase with her telekinesis she couldn’t do it. When she met up with Peter again, the typewriter sprung to life. In getting to the machine, they both again would have to work together. Olivia shutting down the machine on the other side while Peter operating the machine on our side.

Of course, the reason they need to shut it down was because the machine is tearing a hole in our universe threatening to destroy our planet – the plan that Walter-nate had after he couldn’t lure Peter back to his universe.

When Peter enters the machine he is sent forward into what has to be the future (there is a new building in the location of the World Trade Center) and sets up the season finale.

Given FRINGE has been given a fourth season by Fox, the chances are good not all of the answers or resolutions that we are seeking will be given. It certainly appears the overall mythology of the show – the battle of the two universes – will be indeed move along as Peter squares off against his real father in the alternate universe and we’ll get a lot of future looks at what might be and what could be.

Should be a hell of a ride and given how great this season has been, I am happy as hell we are getting one more season (and hopefully more).