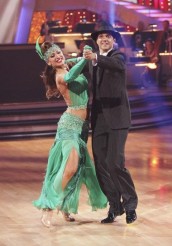 Ralph Macchio is back on top, tying for first with Hines Ward!

In an action-packed two-hour episode stretched out far more than necessary, the seventh week of DANCING WITH THE STARS – Season 12 celebrates the ballroom greats this week with guest judge Donnie Burns, one of the most decorated dancers ever, while esteemed professional dancers Shirley Ballas (yes, Mark’s mom) and Luca Baricchi gave pointers to the remaining six couples during rehearsals.

The pressure was on with the DWTS couples learning two new dances – one for their group dance and the other for their individual dance. The two groups, picked by the two celebs that have accumulated the most points thus far – Hines Ward and Chelsea Kane – were Romeo, Ralph Macchio and Kane on Team Chelsea and Ward, Kirstie Alley and Kendra Wilkinson on Team Hines.

The teams both performed the Cha Cha and they both earned 30 out of a possible 40 points. So the playing field was level as the dancers went into their individual routines. Those scores were added onto their already existing 30 from their group dance. In first place is Macchio, earning his first ten, and Ward, also earning his first ten, with a score of 66. The heat is on and the pressure so intense this week, it’s make it or break it time. Some rose to the challenge (Macchio and Ward) and others crumbled (Alley and Romeo).

Chelsea Kane (Disney Channel Star) and her partner Mark Ballas
This was a tough one for Kane. She is not an intense person so for her to play serious and not smile once throughout the entire Paso Doble proved challenging. The whole thing confused Len Goodman. Bruno Tonioli thought there was plenty of violent intensity abound. Carrie Ann Inaba still saw boundaries being pushed. Guest judge Donnie Burns felt a bit like Goodman, saying he was confused as well and that it was like watching Hell’s Angels dance.
Scores: Inaba – 9, Goodman – 8, Tonioli – 9, Burns – 8, Harland – 8

Hines Ward (Football Star) and his partner Kym Johnson
Ward did the Tango and you could see him focused on every step all the way through (not sure that’s a good thing). Again Goodman thought the whole thing was a mixture for him, liking parts and not caring for other parts. Tonioli loved it. Inaba thought Ward took command of the dance. And Burns thought Ward had a lot of charisma.
Scores: Inaba – 9, Goodman – 8, Tonioli – 10, Burns – 9, Harland – 9

Romeo (rapper/actor) and his partner Chelsie Hightower
What happened? He went from the top to the bottom in a split second. I guess he got too comfortable holding the top spot last week. Tonioli still gave kudos to his getting down and shaking it in his Samba. Inaba thought the wrong bounce was going on in his shake. Burns reprimanded him about everything he does now being crucial to getting to the finals. Goodman was flat out disappointed saying he didn’t like it.
Scores: Inaba – 8, Goodman – 7, Tonioli – 8, Burns – 7, Harland – 7

Kendra Wilkinson (Reality TV Star) and her partner Louis van Amstel
Boy is she struggling to stay afloat and it shows. However, she is working hard and that shows as well. Tonioli mused she never looked more lady like dancing the Tango. Inaba told her she was proud of her. Goodman thought it lacked crispness while Burns thought she did a bloody well job of it.
Scores: Inaba – 8, Goodman – 7, Tonioli – 8, Burns – 8, Harland – 8

Ralph Macchio (Actor) and his partner Karina Smirnoff
Hey Ralphie Boy! You’re back! Yea! Macchio’s Quickstep was awesome, fun, sharp and well deserving of at least one ten. Burns said Macchio and Smirnoff rocked. Goodman said it was a great job for a hard dance. Tonioli got kinky saying it was an instructional manual for grabbing a quick one. Inaba hollered, “You’re Back!”
Scores: Inaba – 9, Goodman – 8, Tonioli – 9, Burns 10, Harland – 9

Kirstie Alley (Actress) and her partner Maksim Chmerkovskiy
Some technical difficulties in her steps caused Alley to falter a bit this week, but Burns was not swayed and said he really enjoyed the entertainment value of her Jive. Inaba rejoiced in her admiration. Goodman gave it little credit as a Jive. Tonioli, also thought the show business parts of it were very good.
Scores: Inaba – 7, Goodman – 6, Tonioli – 8, Burns – 9, Harland – 8

Who’s going home? It’s probably going to be Wilkinson or Romeo since the public seems to love Alley way too much to let her go.

Who Has Legs To Take Home The Mirror Ball? Anyone!!!!!!!!! Well, except for Wilkinson. Stay tuned!

UPDATE: CLICK HERE to find out who was voted off this week and view photos from the elimination