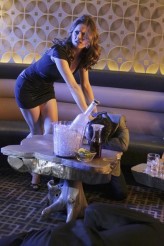 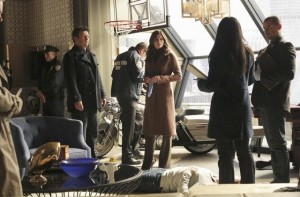 In Castle’s case, it’s a legitimate question – as he points out, he won a lottery of sorts when his first novel became a best seller.

But at the same time, Castle’s mom Martha (Susan Sullivan) must deal with a different kind of windfall – she was left a million dollars by her now-deceased lover.

Oh, and the crime. It’s the typical format. We see someone (in this case, the vic’s butler played by Alastair Duncan) find the stiff, Jay Hixton (Skoti Collins). And from there, Castle and Detective Kate Beckett (Stana Katic), interview suspect after suspect until they figure out whodunit. Yes, Castle racks up a few quips on the Butler Did It theme.

Oh, and it comes out that everyone knows about Detective Esposito (Jon Huertas) and coroner Lanie Parish (Tamala Jones) – one of the nicer relationships in the series.

After the fireworks of the previous episode, which ran two weeks ago, this one seems a little blah and formula. That being said, it has all the usual fun and wit, which is mostly what makes this series so fun to watch. It’s not going to set anything or anyone on fire. It stands very nicely on its own, although it doesn’t hurt to know about Beckett’s mother when you see the end. But more than that, not going to happen here.