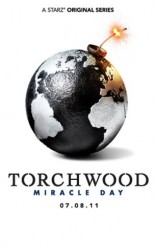 The Starz series will premiere Friday, July 8 at 10:00 pm

Starz has been making some noise with SPARTACUS and the forthcoming CAMELOT TV series, but geeks are even more excited about seeing their new TORCHWOOD: MIRACLE DAY series which brings the BBC series to the U.S. and they just released a brand new poster for the series (check it below). 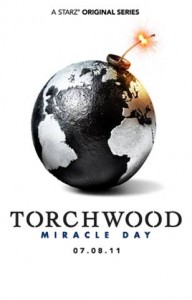 John Barrowman as Capt. Jack Harkness) and Eve Myles as Gwen Cooper return from the BBC series by Bill Pullman, Mekhi Phifer and Lauren Ambrose (in an extended guest role).

The press release reveals new cast members as well. Alexa Havins will play Esther Drummond, a deskbound CIA employee who dreams of active duty and who suddenly finds herself running alongside Jack, Gwen and Rex while Arlene Tur is Dr. Vera Juarez, a Washington D.C. surgeon, who finds herself on the frontline of medical care on “Miracle Day” advising the government think-tanks on the best course of action for the world’s population.

The official synopsis is below:

TORCHWOOD begins with a day when nobody dies. All across the world, nobody dies. And then the next day, and the next, and the next, people keep aging, they get hurt and sick, but they never die. The result: a population boom, overnight. With all the extra people, resources are finite. It’s said that in four month’s time, the human race will cease to be viable. But this can’t be a natural event – someone’s got to be behind it. It’s a race against time as C.I.A. agent Rex Matheson investigates a global conspiracy. The answers lie within an old, secret British institute. As Rex keeps asking “What is Torchwood?,” he’s drawn into a world of adventure, and a threat to change what it means to be human, forever.