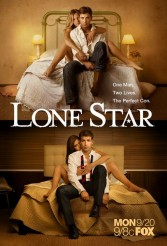 With only two episodes aired before it was cancelled, it was one of the fall's biggest disappointments

“We made a show we really loved, and thought the creators were very talented and made an excellent show,” says Rice. “ [The critics] believed in the show and liked the show, but not enough people showed up to watch it. We were very disappointed in that. It’s the reality of the business we’re in. It’s intensely competitive and you make the best shows you can. The truth is, it failed to meet the expectations we had. That doesn’t mean we don’t like the show and respect the people who made it. I would much prefer to fail with a show we’re creatively proud of than fail with a show that we’re embarrassed by.”

Fox Entertainment President Kevin Reilly has similar thoughts on the noting “you’re only a few DNA strands between a hit and a failure.”

“That same DNA of being creatively bold yielded GLEE and we thought we were taking another bold bet [with LONE STAR],” Reilly adds. “Unfortunately, it went the other way for us.”