Home » TCA 2011: The producers of AMERICAN IDOL explain how they will improve the show in Season 10 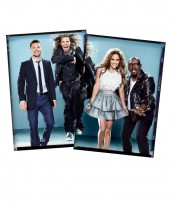 “It’s giving the right information to the contestants, so they continue with their journey as an artist,” says Lythgoe. “It’s a lot more searching for that eventual winner, rather than stopping people from getting there. In the past, we may have been accused of putting barriers against them with glib remarks, instead of helping them through the process. At the end of the day, it’s America that decides. Whether they made the mistakes along the way, Americans normally always got it right. We know the job this season it to put them on the right paths.”

For Jimmy Iovine, who is Chairman of Interscope A&EM Records and whose parent company Universal Music Group will  release the music of the eventual winner from the show, says it was important for his label to be involved from the beginning.

“My role is to help and find an original voice,” says Iovine. “It’s singing with their own voice, as opposed to singing like something else, which is not attractive to a record company. [The contestants] will be picking their own songs, but we will be coaching them. We have four or five great producers to cut tracks, so everyone doesn’t sound the same each week, and to make sure they improve every week. In the past, I don’t think they were getting the help to improve.”